Click this
You are here: Home / Food & Drink / A Taste of the Korean Drama Secret Garden @ Caffé Bene Eastwood

If you’re a huge fan of the K-Drama Secret Garden, then you’re most certainly familiar with this super cute scene between Gil Ra Im (played by Ha Ji Won) and Kim Joo Won (played by Hyun Bin) at Caffe Bene. (Click to watch) 🙂

You can just imagine how ecstatic I was when I found out from Ruffecola’s Travel Tales that Caffé Bene has opened its very first shop in the Philippines two months ago. 🙂 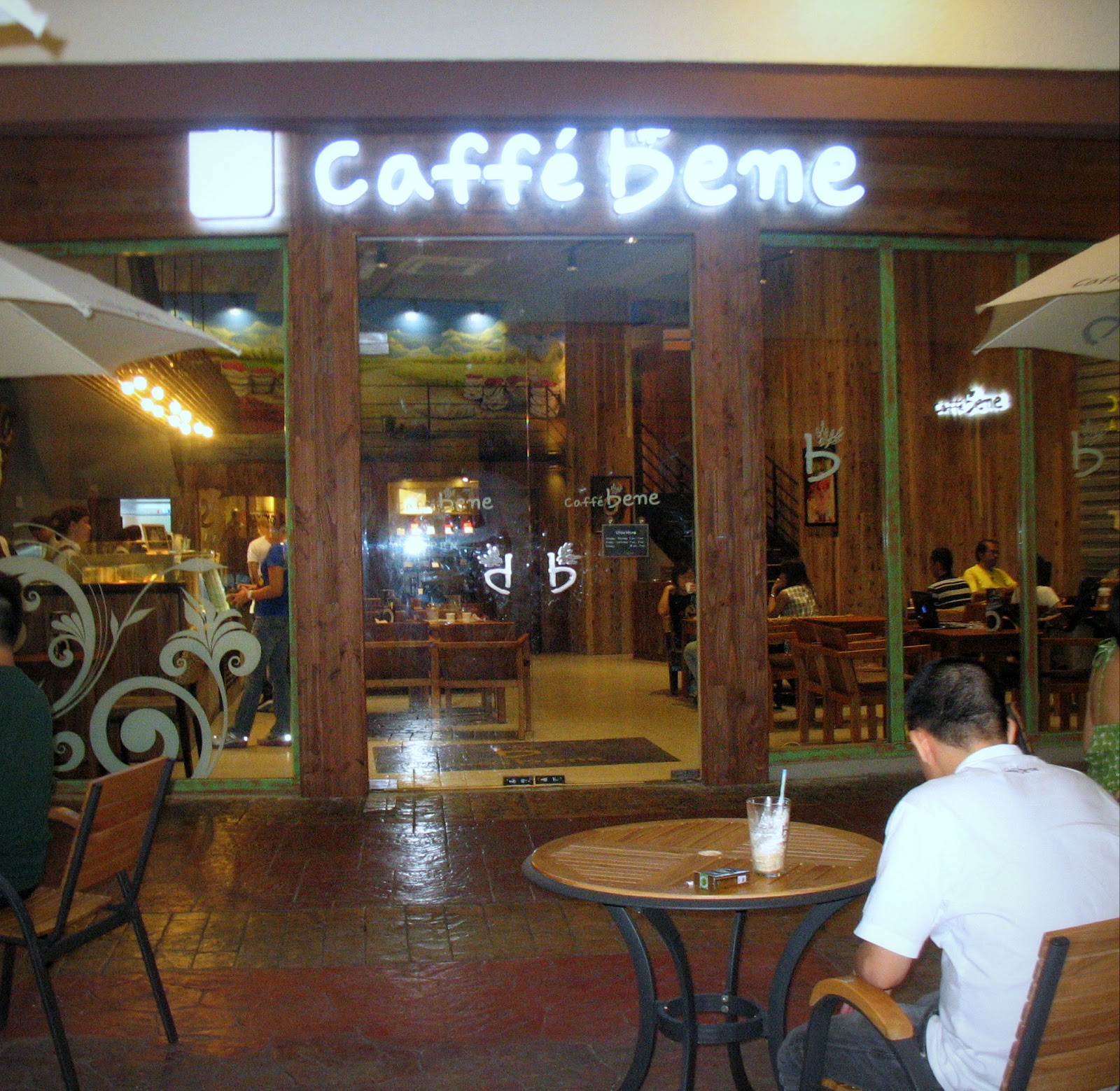 We walked past these two cafes and headed towards Caffé Bene: A must–see place for any K-drama/K-pop fan, if you ask me. I started snapping a few photos at first, for I wasn’t really sure if photo-ops were allowed inside the cafe. But when I saw the other customers doing the same thing, I threw away my shy persona and turned into a mean pic-taking machine, so to speak. 🙂

Thankfully, Tutapel was easily coerced that night to do some poses of his own. 🙂

Tutapel’s Signature Pose @ Caffe Bene Eastwood City Walk 2
While waiting for our food to be served, I can’t help but admire the elegant wood wall panels and the warm, cozy feel of the interiors. 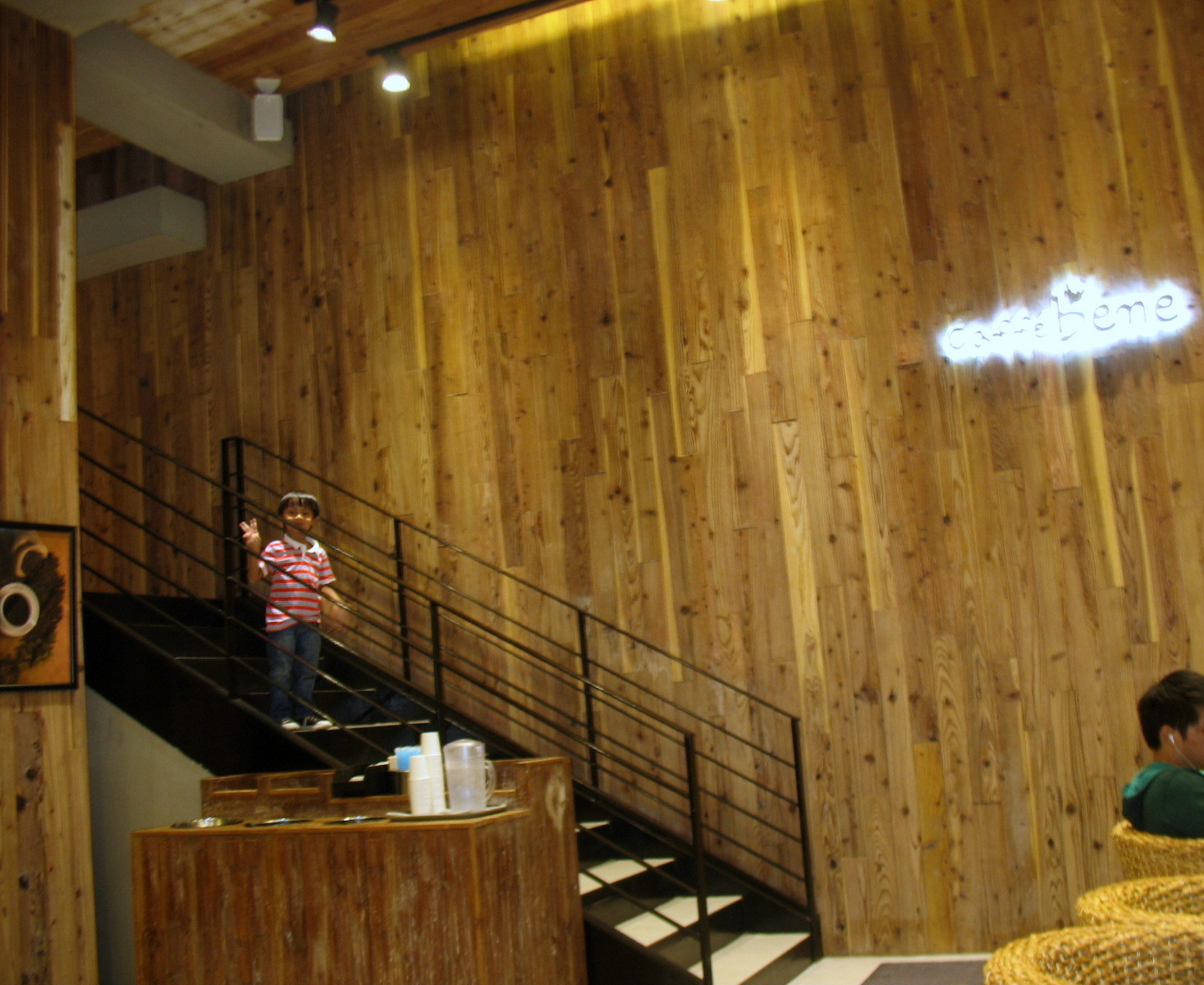 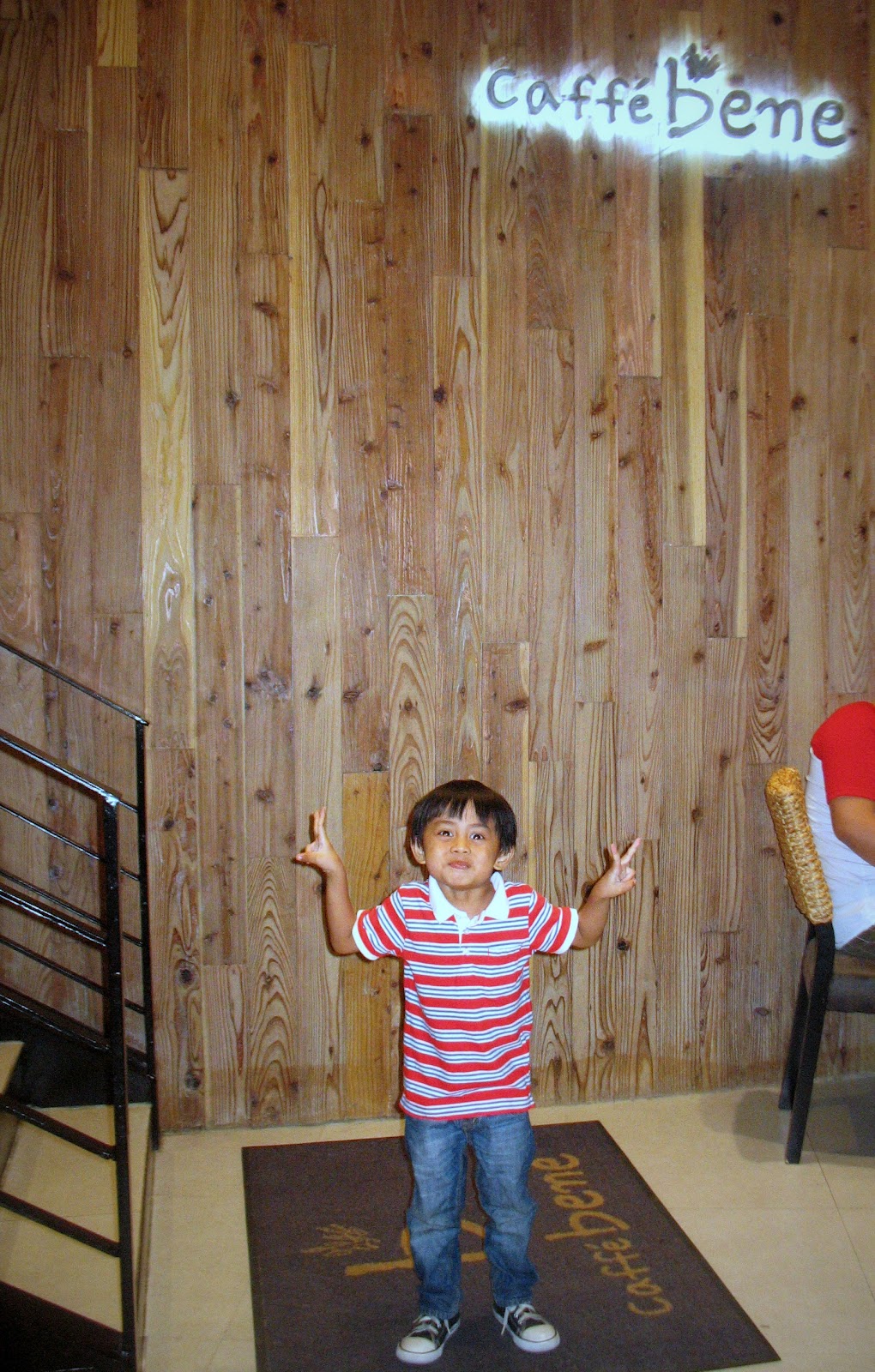 Caffe Bene’s signature clock, an instrumental part in that famous Secret Garden scene, was also displayed on the wall. It was really a unique accent piece, if you ask me.

Caffe Bene Philippines
(Eastwood City Walk 2 Branch)
My attention shifted to our food when the kind staff finally served it. Although I was clearly excited to try everything, I was also a little bit concerned on how the three of us can finish everything- considering that Tutapel wasn’t really a big eater and all. 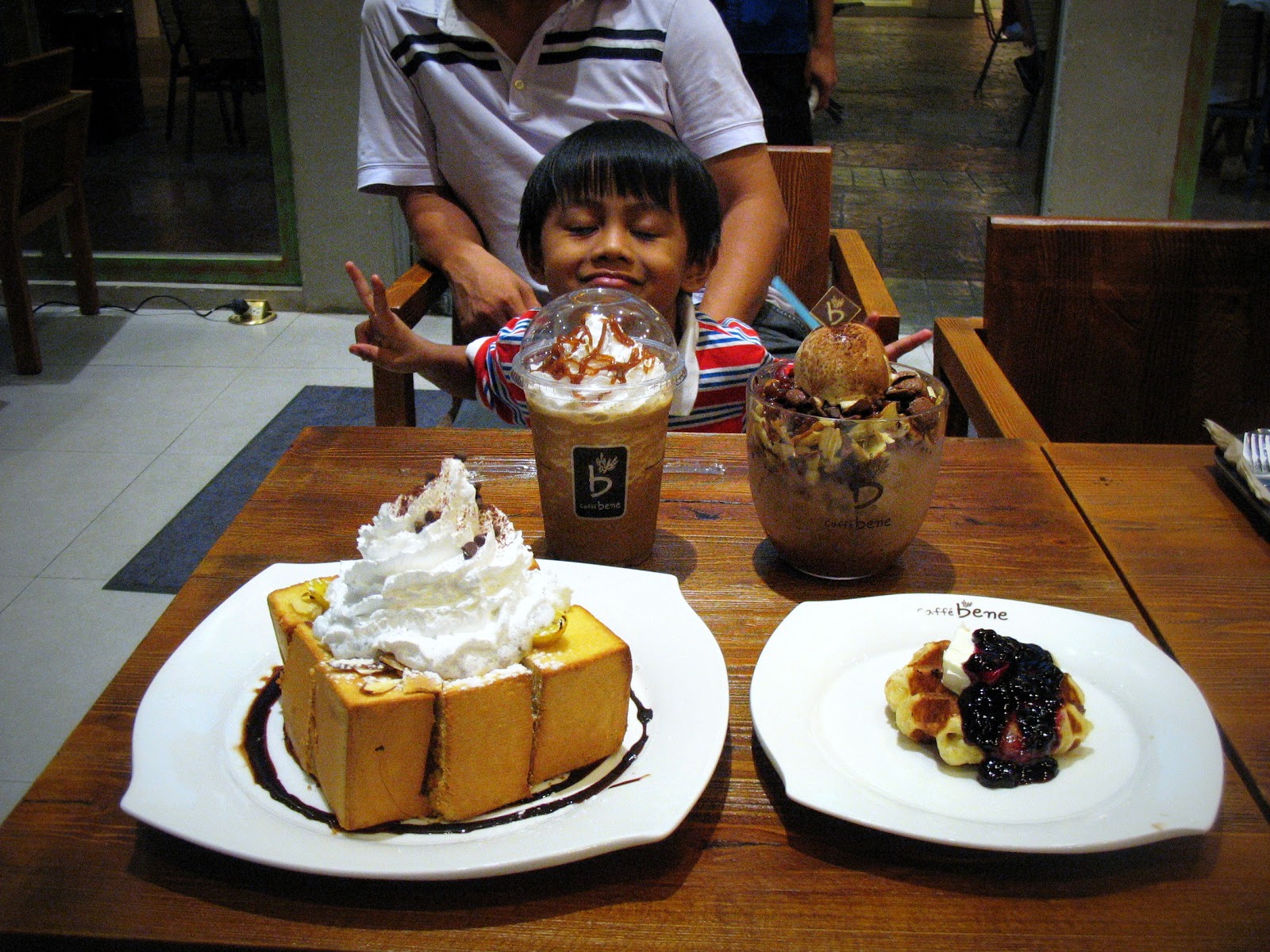 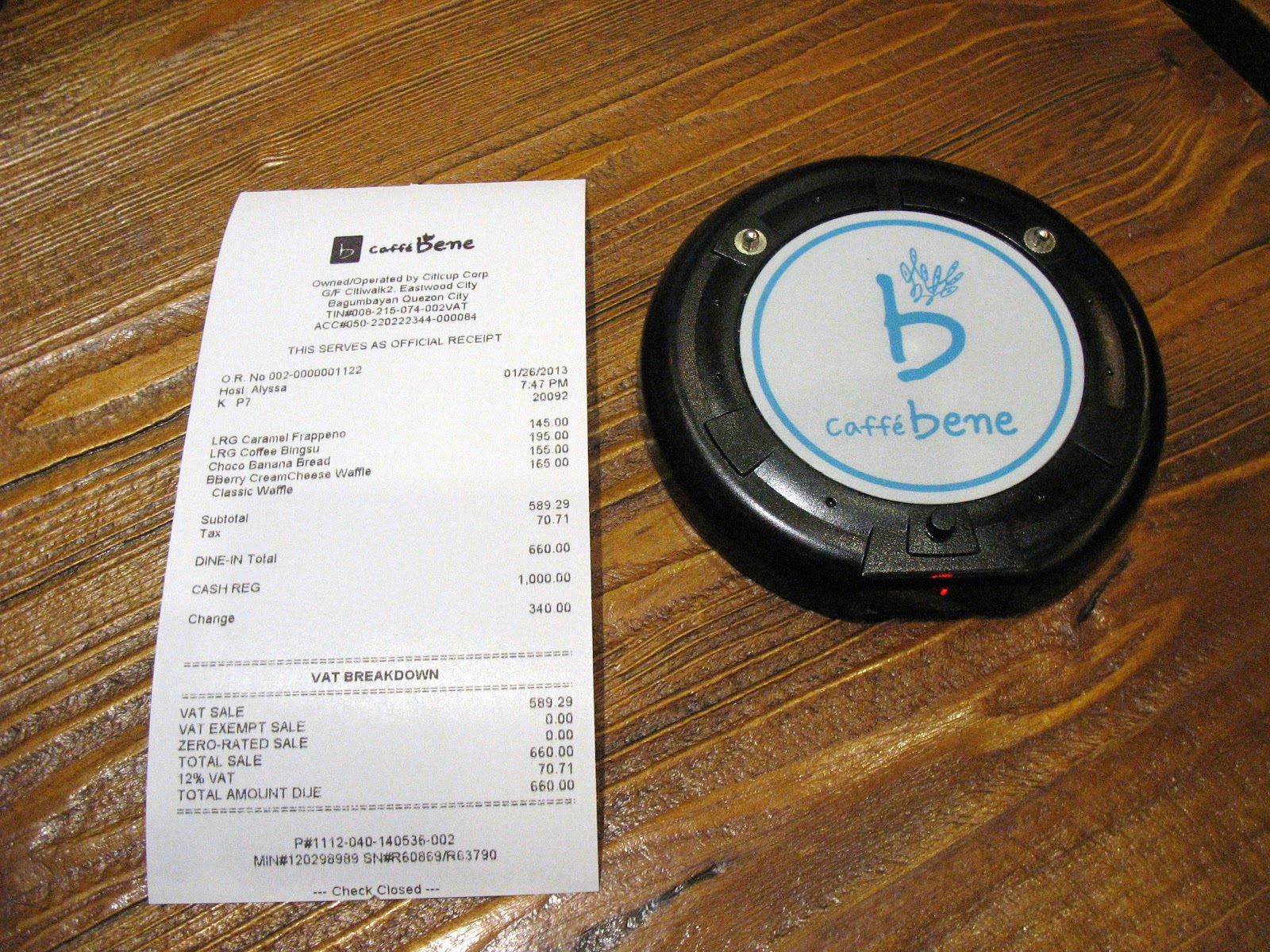 Our receipt at Caffe Bene Eastwood City Walk 2
My Thoughts: 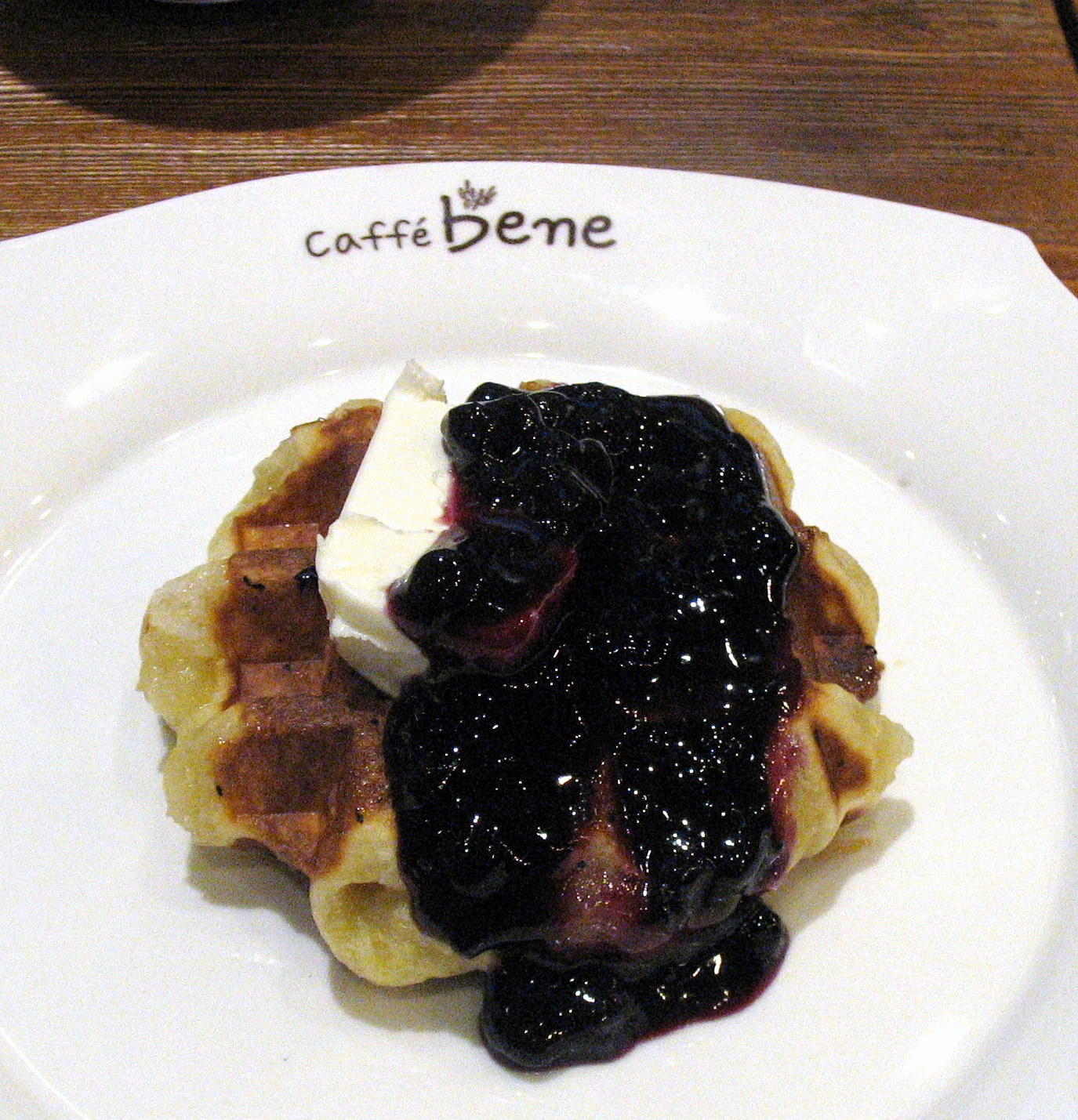 Totally to-die-for confection for it literally created a symphony of flavors in my mouth! A little sweet ‘n’ salty, thanks in part to that delightful slab of cream cheese on top, while the tartness coming from the jam, sealed in all the wonderful flavors in that petite serving. A great comfort food that I will never get tired of eating, over and over again. 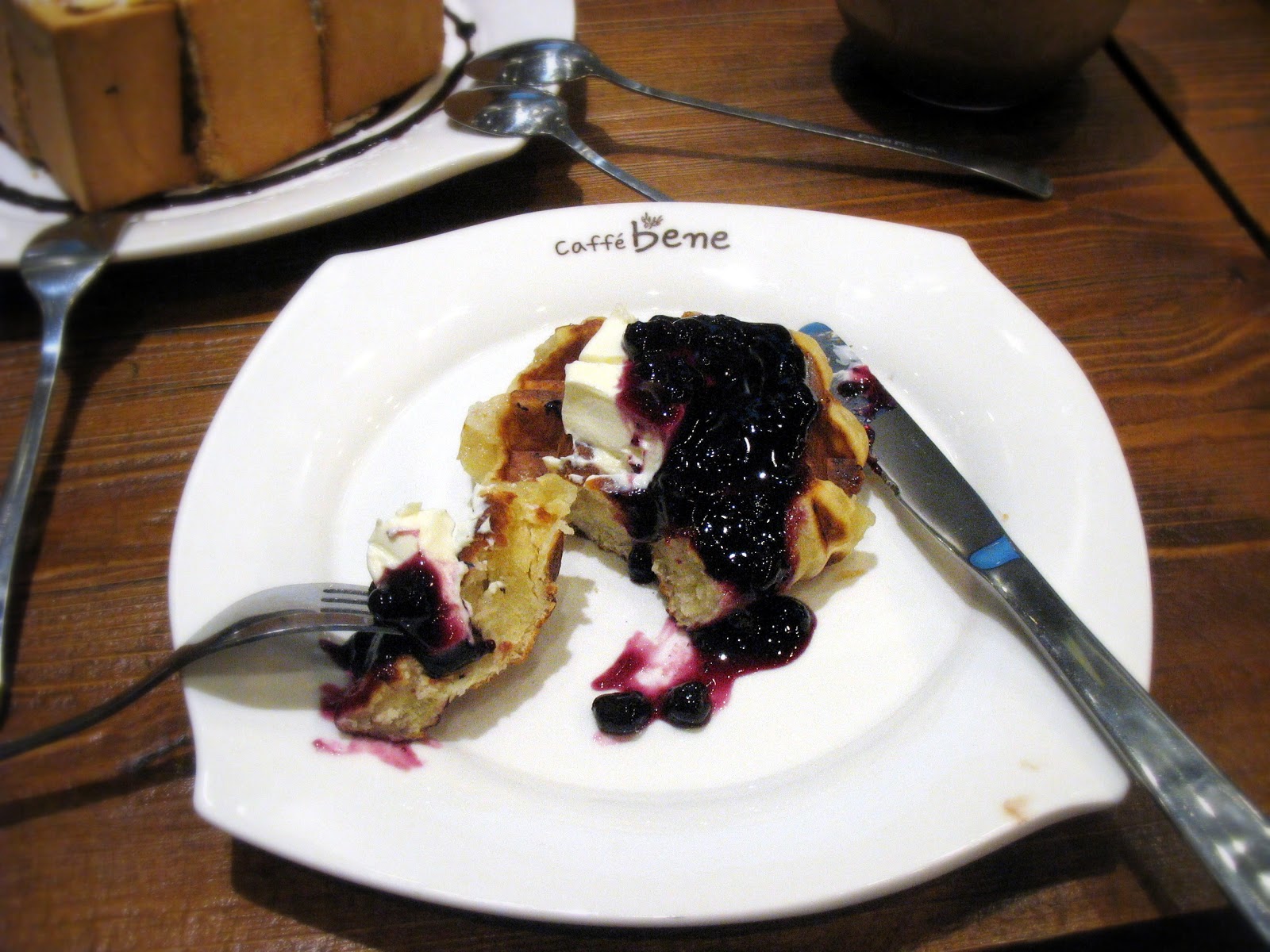 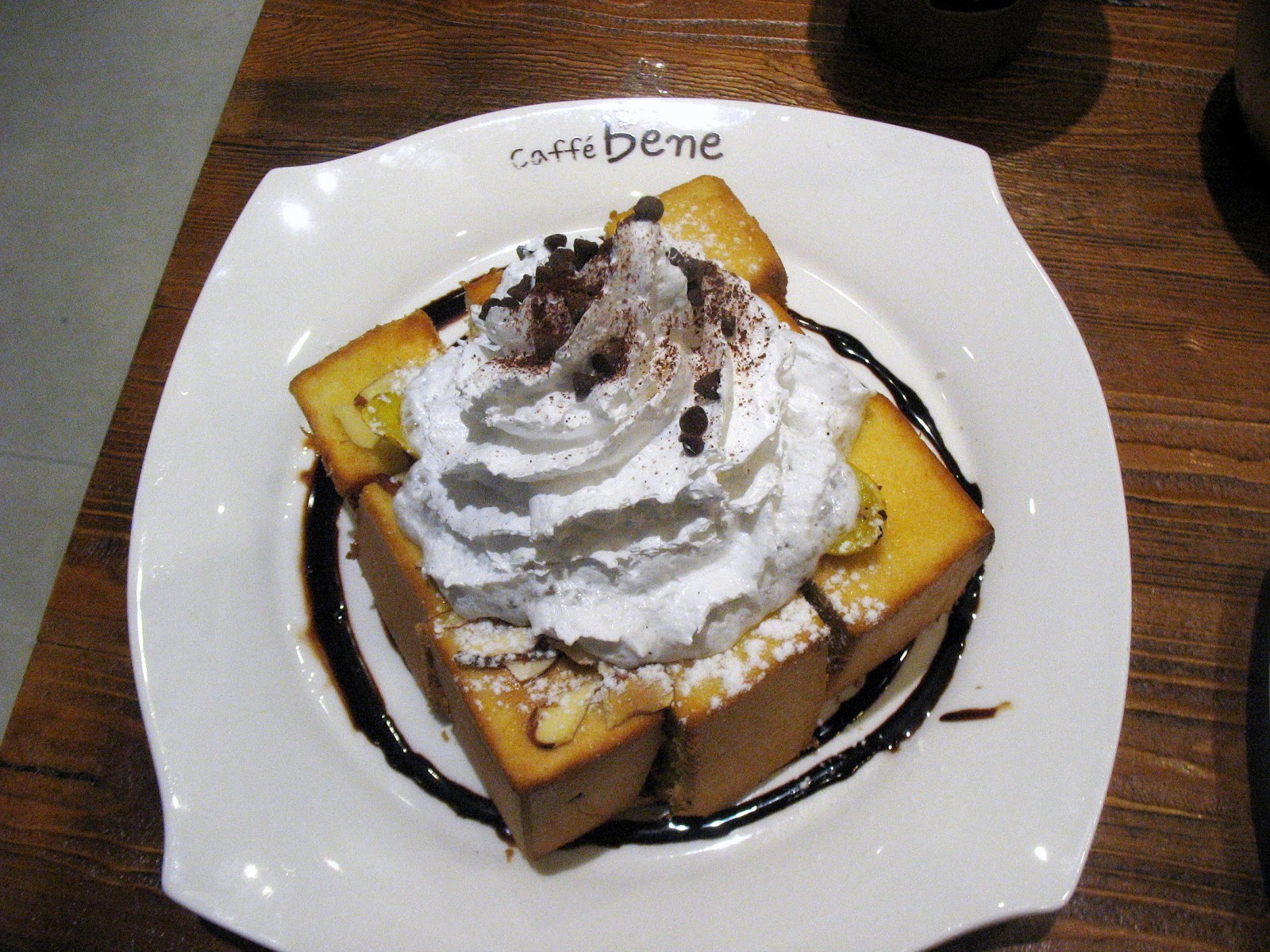 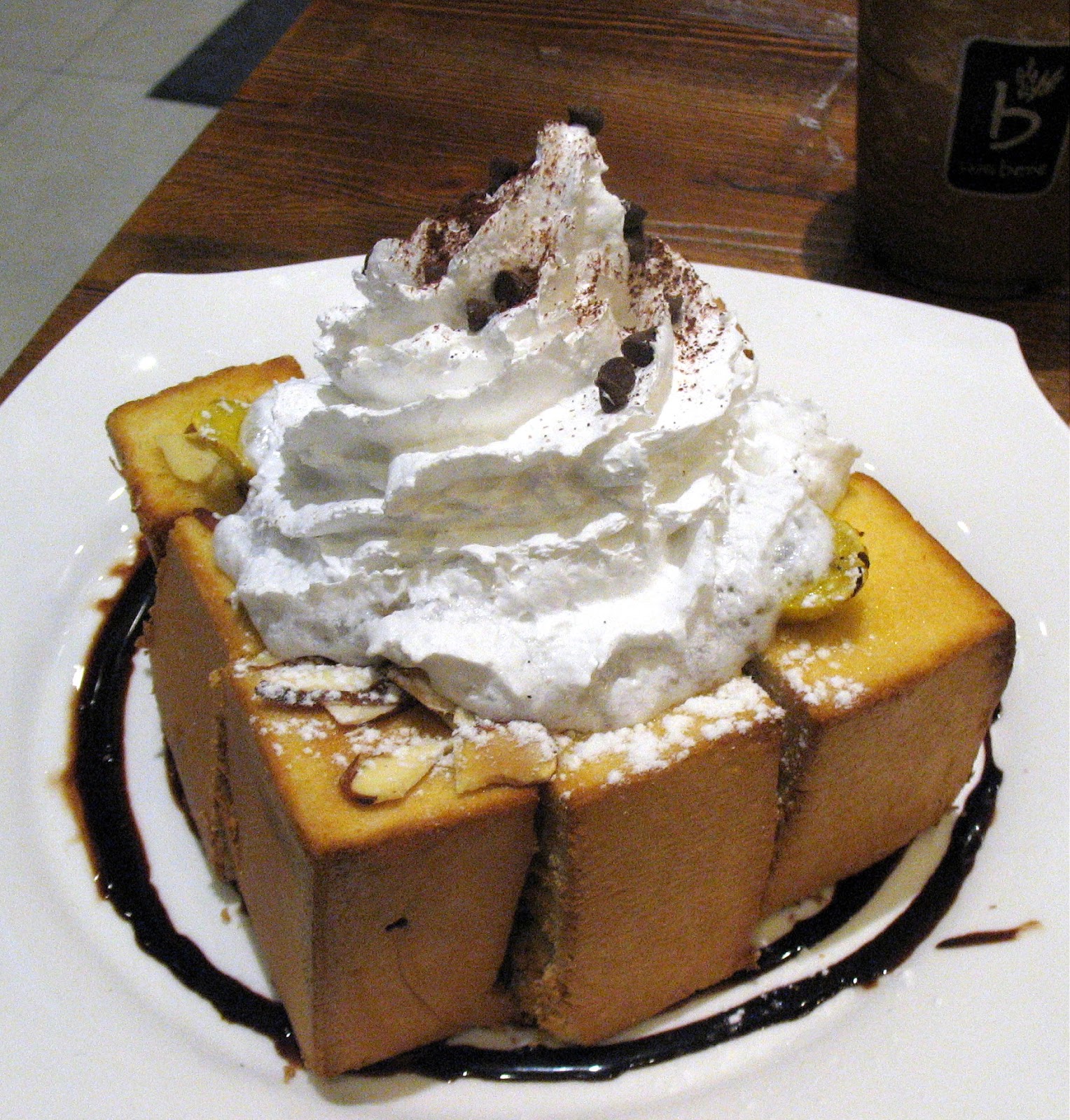 Caffe Bene Eastwood City Walk 2
Up close, the bread was a tad bigger than I initially thought. I expected a slice of  thin bread just like at Caffe Ti-Amo’s; but, obviously, I was mistaken. Primarily designed as a comfort food in between sips of coffee, the confection though delish, was a bit too overwhelming to eat, maybe because of its super crunchy and thick crust. Great for sharing; though, I’m not at all sold out when you’re dining alone, not unless you’re a certified big eater or someone who doesn’t mind taking doggie bags. 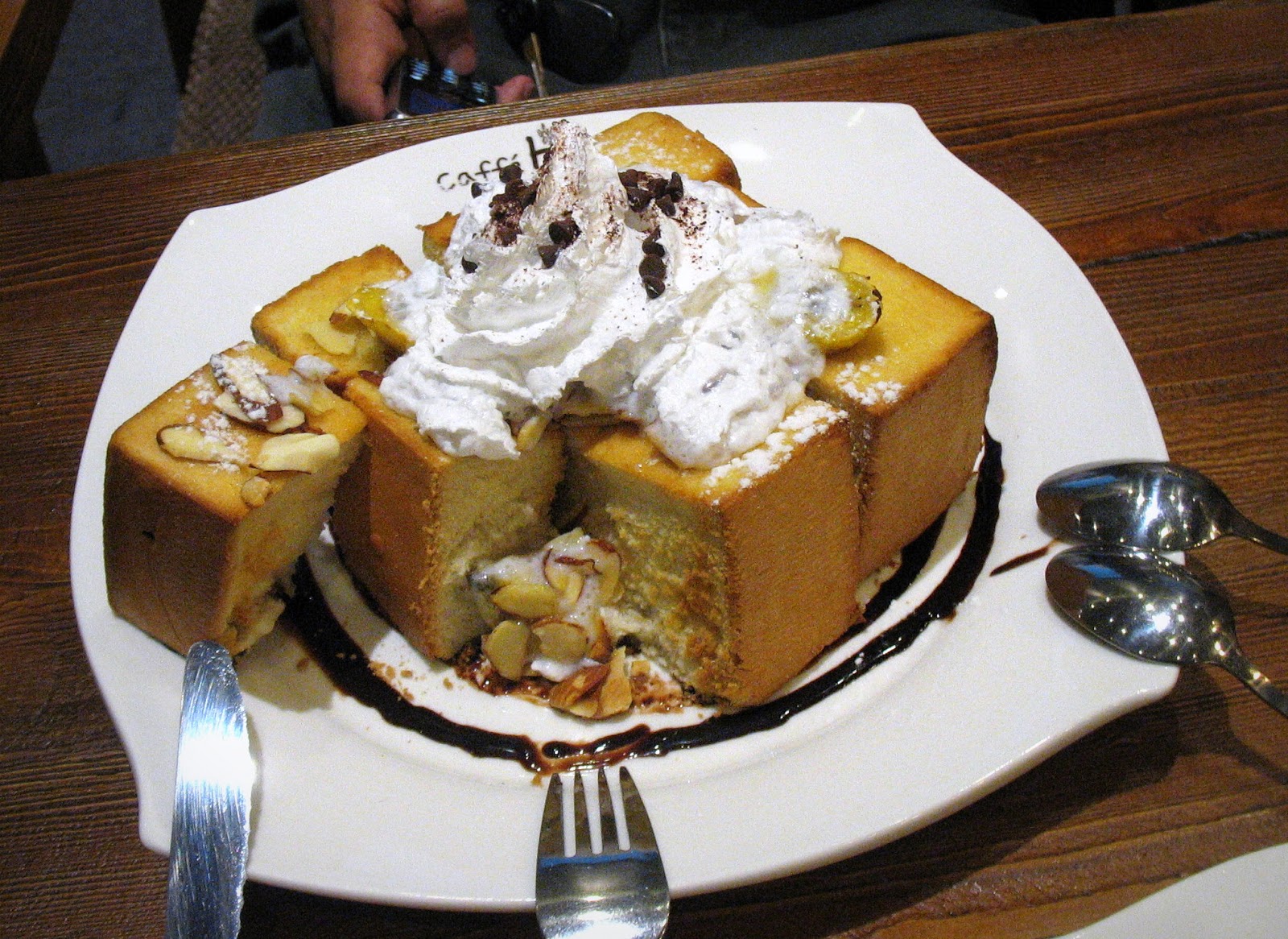 Mocha Frappeno (Large 145). Sweeter than expected made even better by that mild caffeine punch. Enjoying coffee-based drinks is rather new for me because I’ve always preferred the cream more than the coffee, well, not until recently. 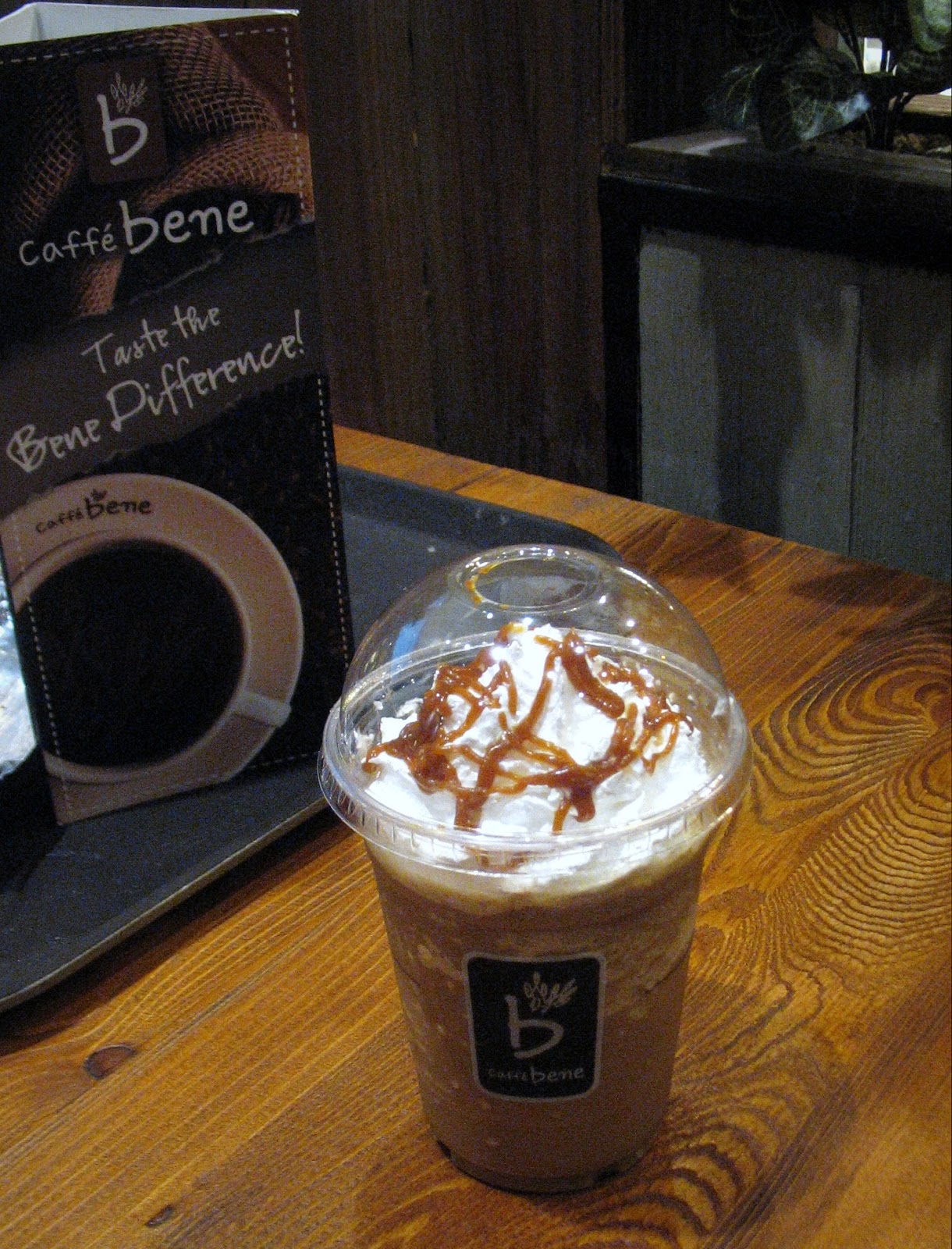 Coffee Bingsu (Large: Php 195). Just like its Pinoy counterpart called the halo-halo, this particular Bingsu variant overflows with an array of delish toppings such as red beans, almond slices, cereals, choco chips served on a bed of ice shavings and topped with a scoop of coffee gelato. 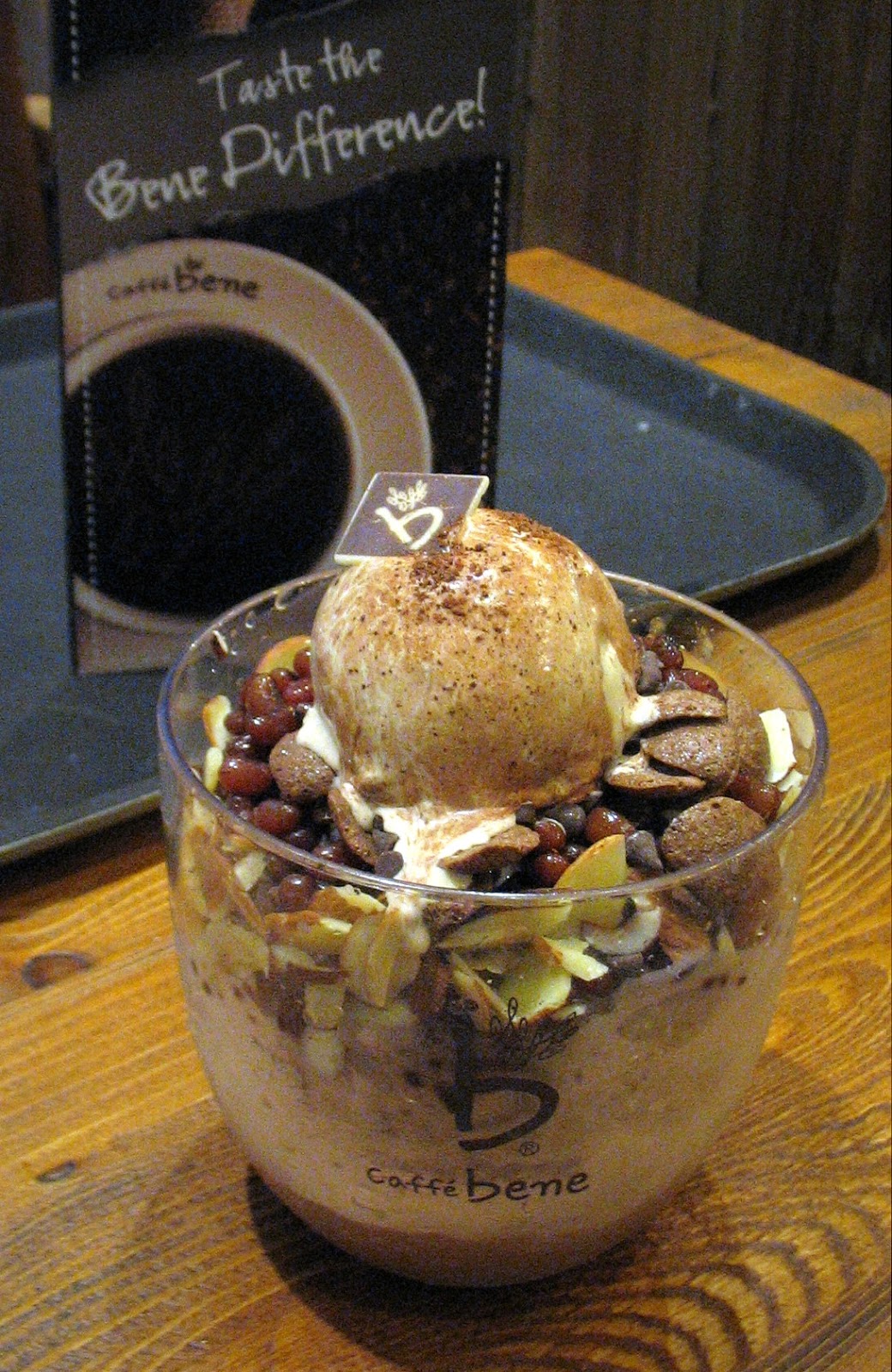 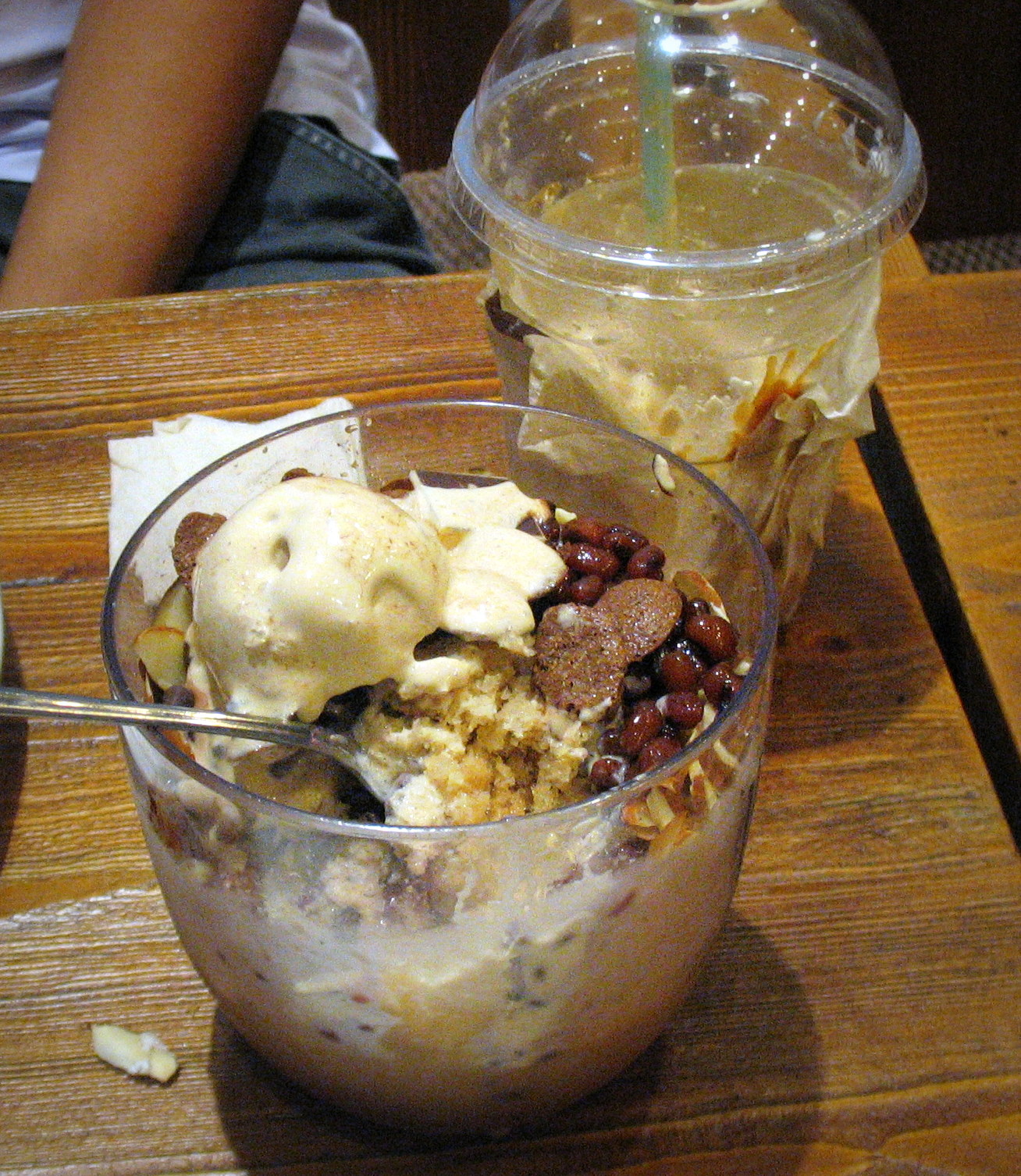 To be honest, I was drawn to make a visit to Caffé Bene because it was a significant place in one of the most popular scenes of my favorite korean drama, Secret Garden. During our visit, however, I soon  discovered that the cafe had sooo much more to offer.

Next time, I would definitely drag my friends Mars Cel and Charm to try out a scoop or two of their gelato… 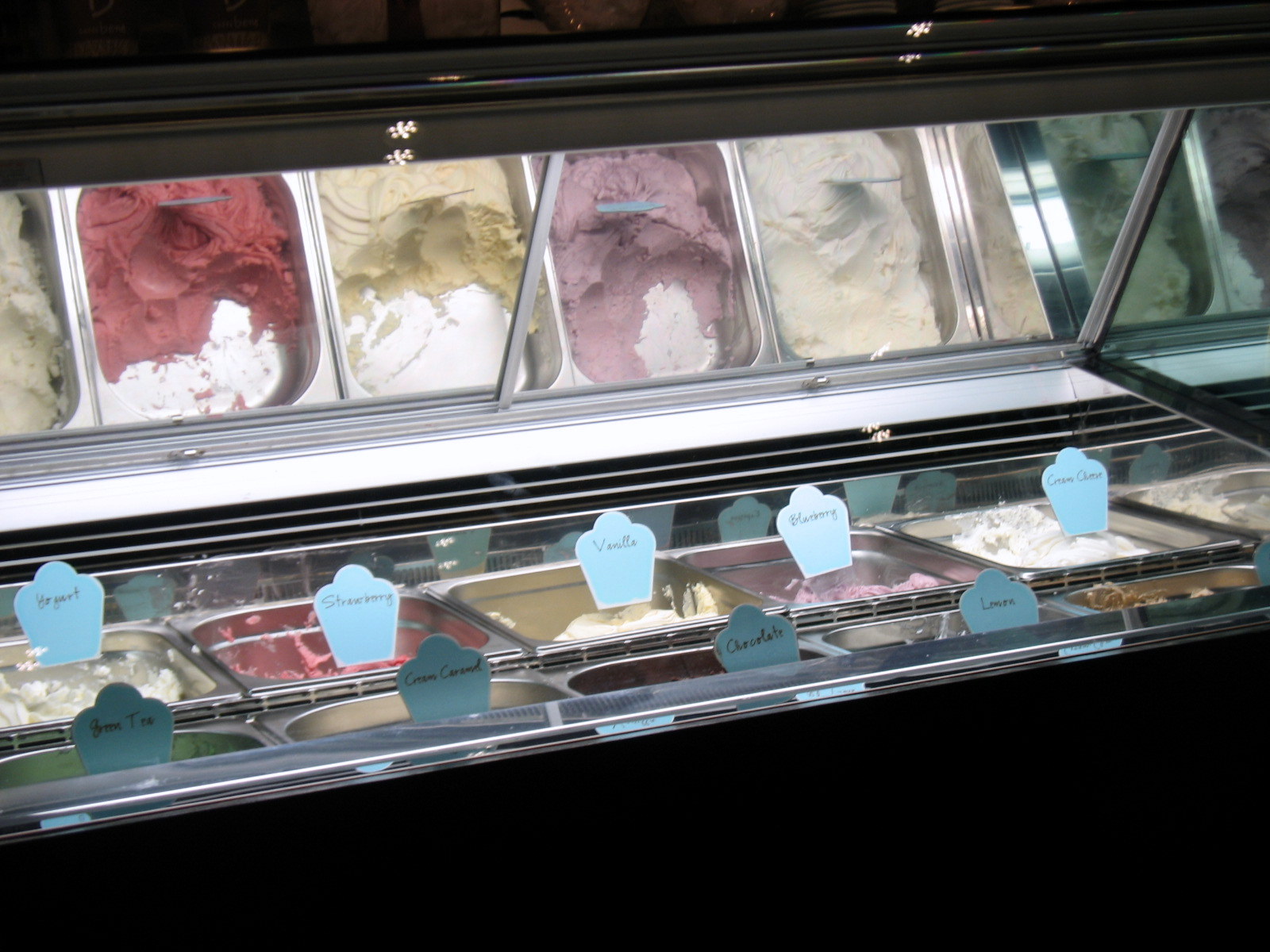 … and grab a mug with the signature Caffe Bene logo printed on it. 🙂

And maybe, just maybe, I can muster up the courage to don that elusive cream moustache as well. 🙂 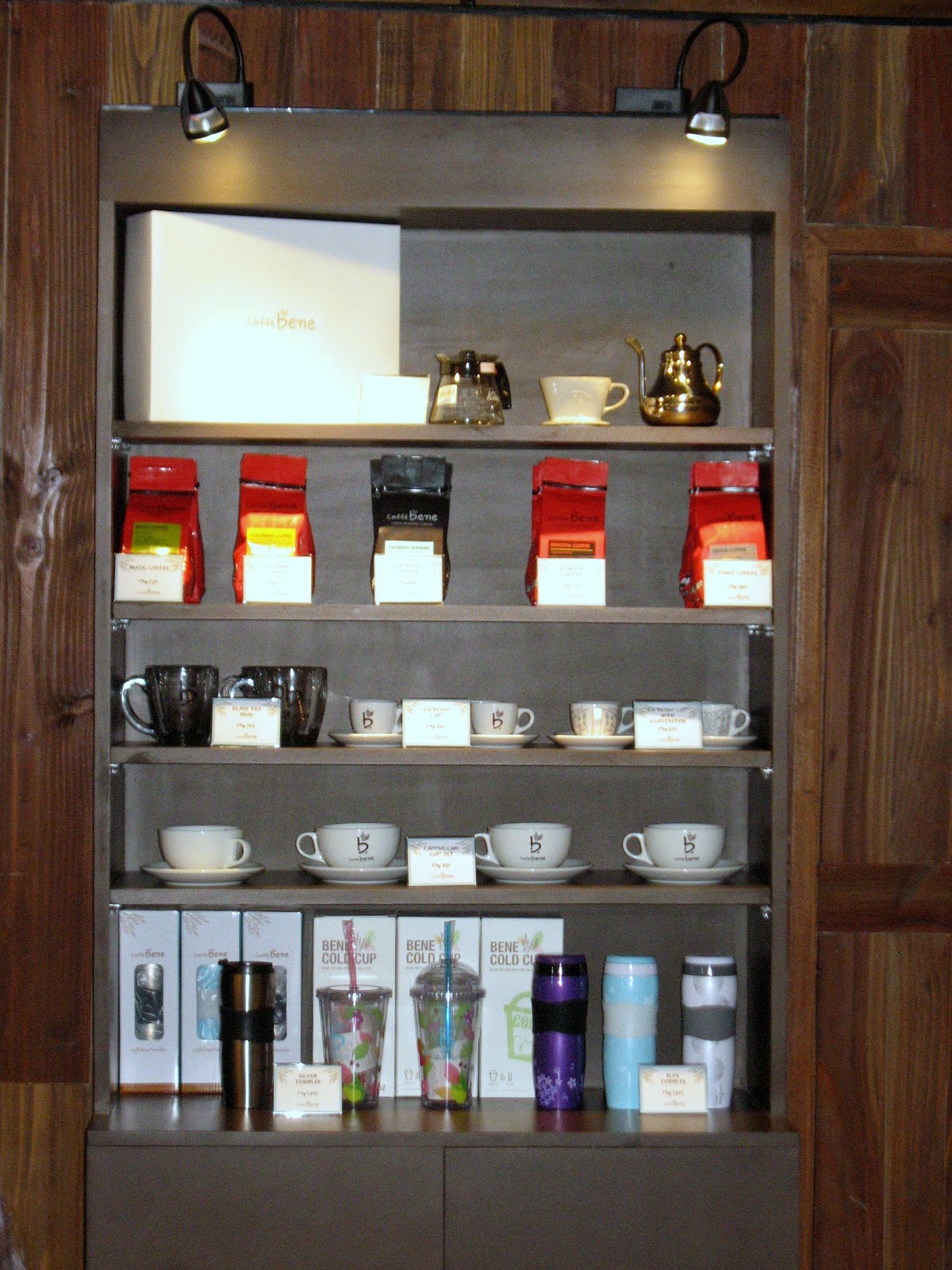 Raring for a visit to Caffe Bene? Do check out their menu first: 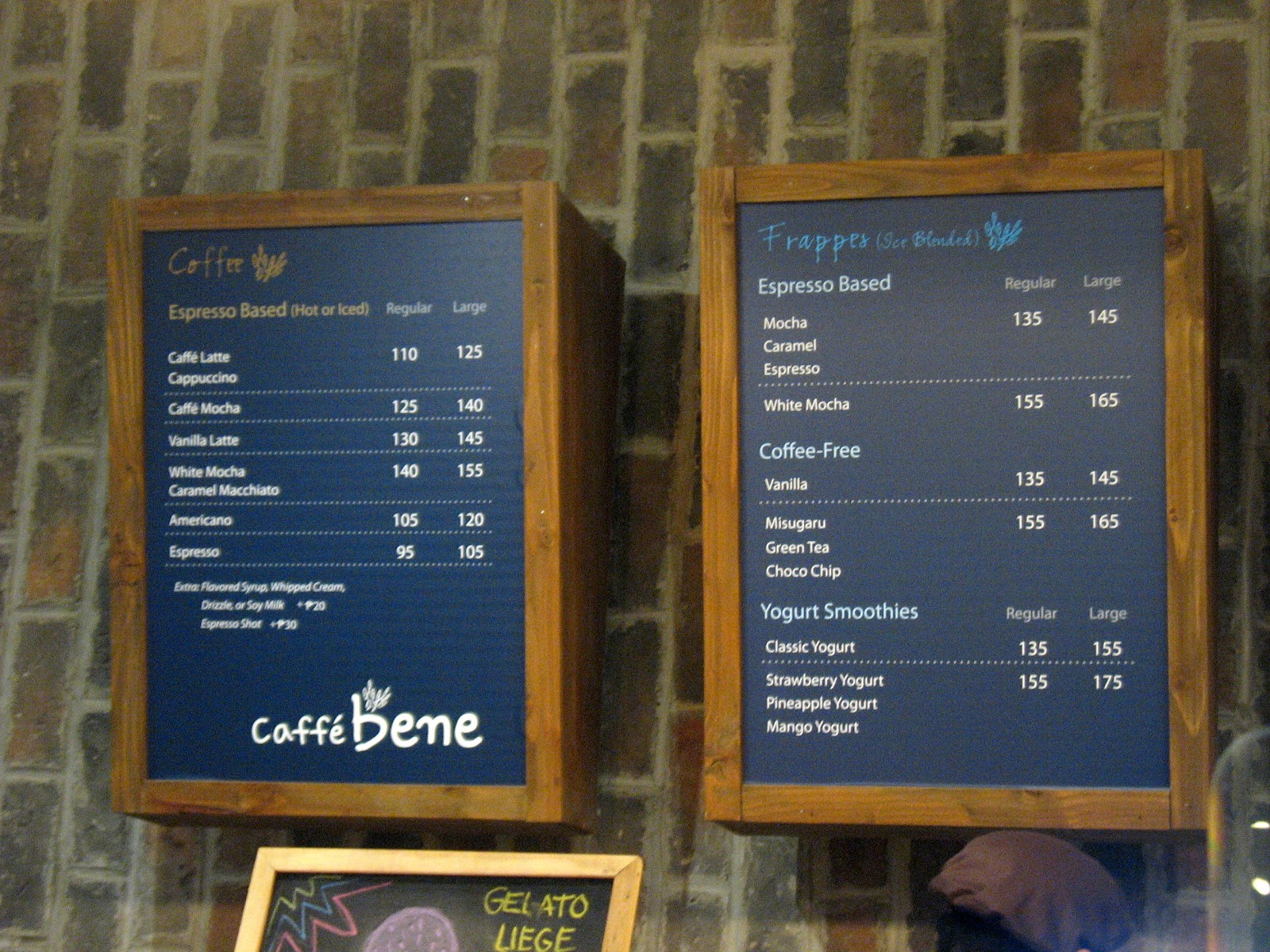 And while you’re at it, I’ve taken the liberty of posting some eye-candy videos featuring a roster of Caffe Bene’s former and present day endorsers- simply for our absolute enjoyment. 🙂

Let’s start with the Jang geun-suk and Han ye-seul team-up in this lovely commercial.

Watch them in action in this very cute CF. Enjoy! 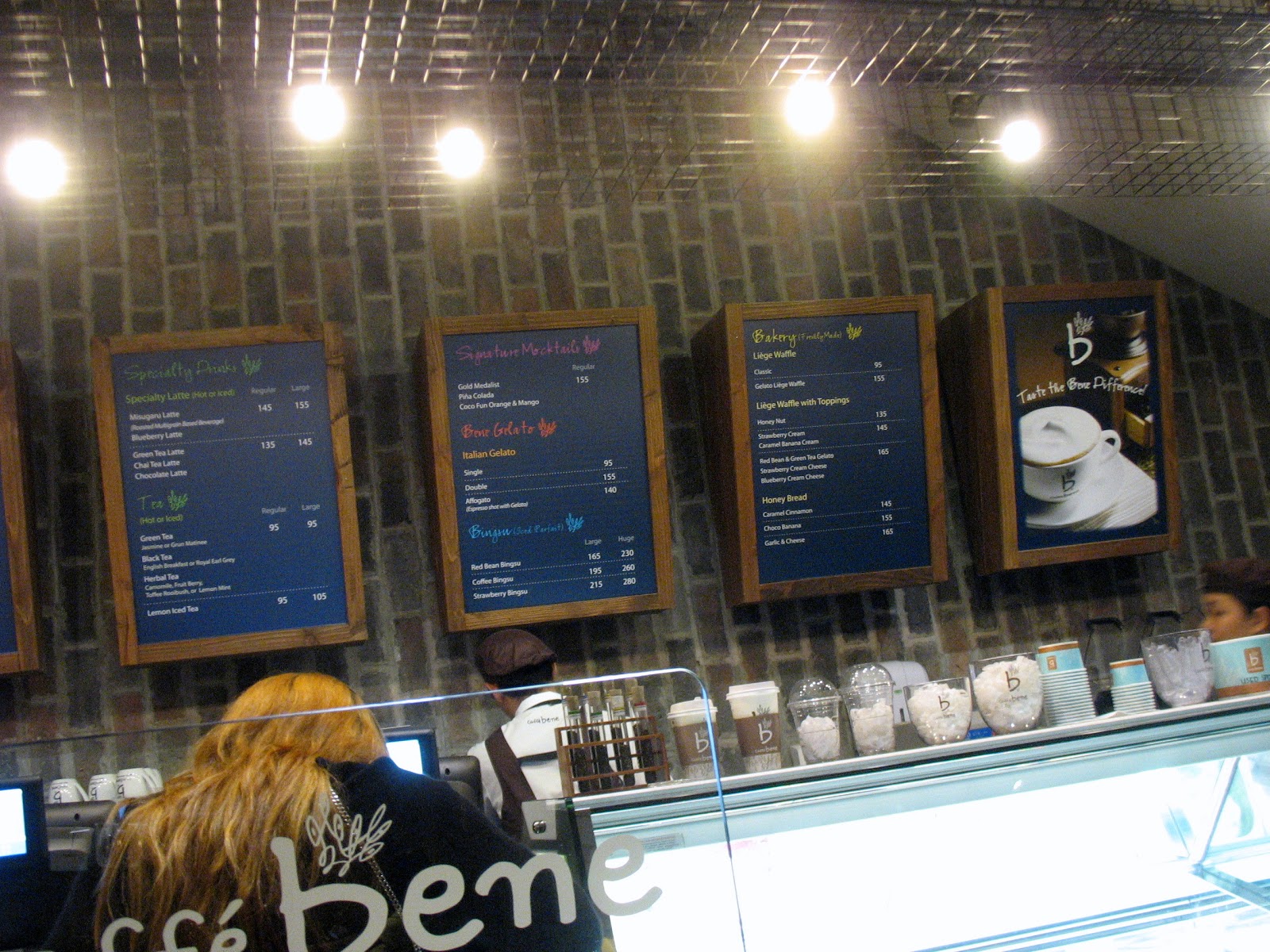