Whenever I pass by Freeway… 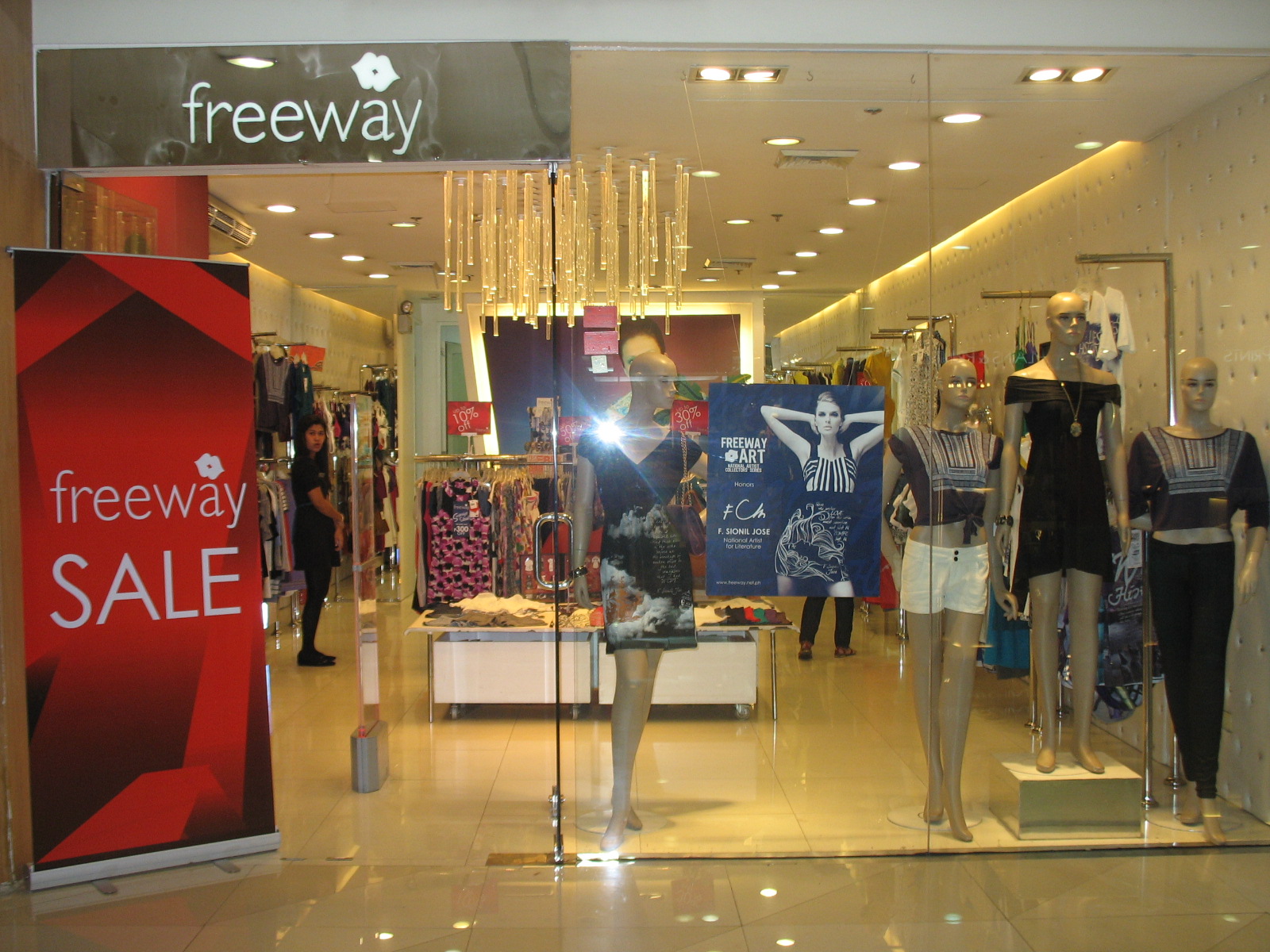 …I can’t help but remember my two favorite purchases from a couple of  years back.

I call this my “Joo Yoo Rin Jacket” for Lee Da-hae  sported almost the same one in the popular Korean drama My Girl. 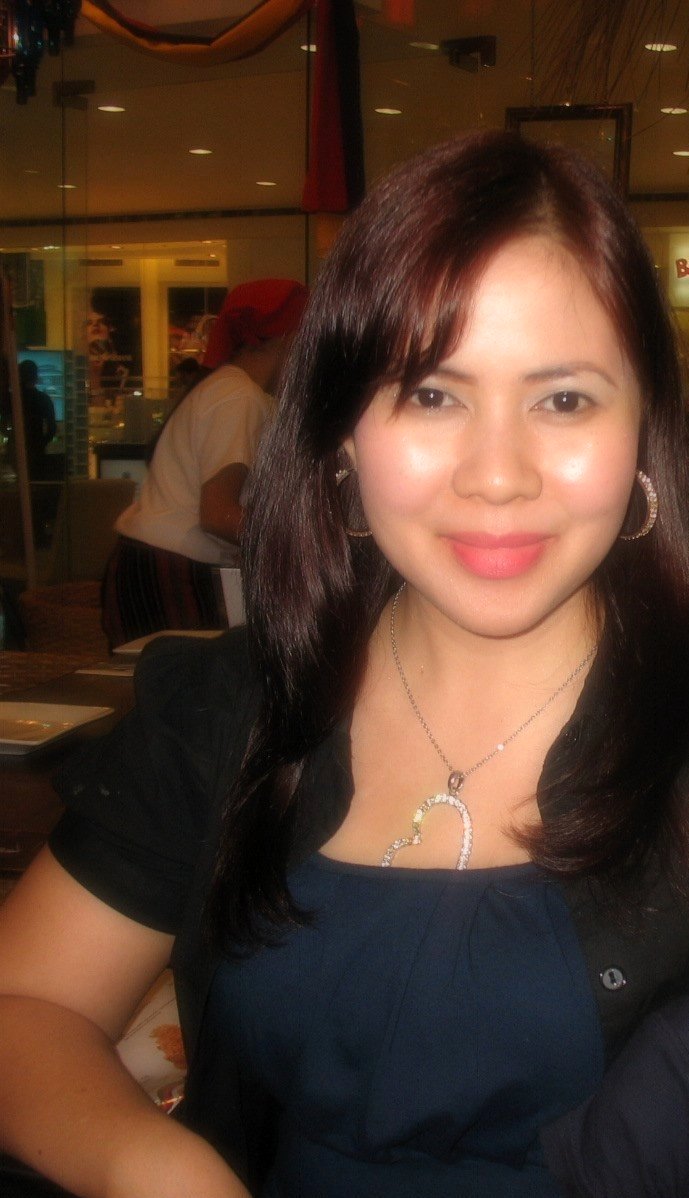 And of course the heart-shaped pendant that I’m sometimes seen in, also came from there. I ditched the tummy-long chain though in favor of this short, tiny alternative. 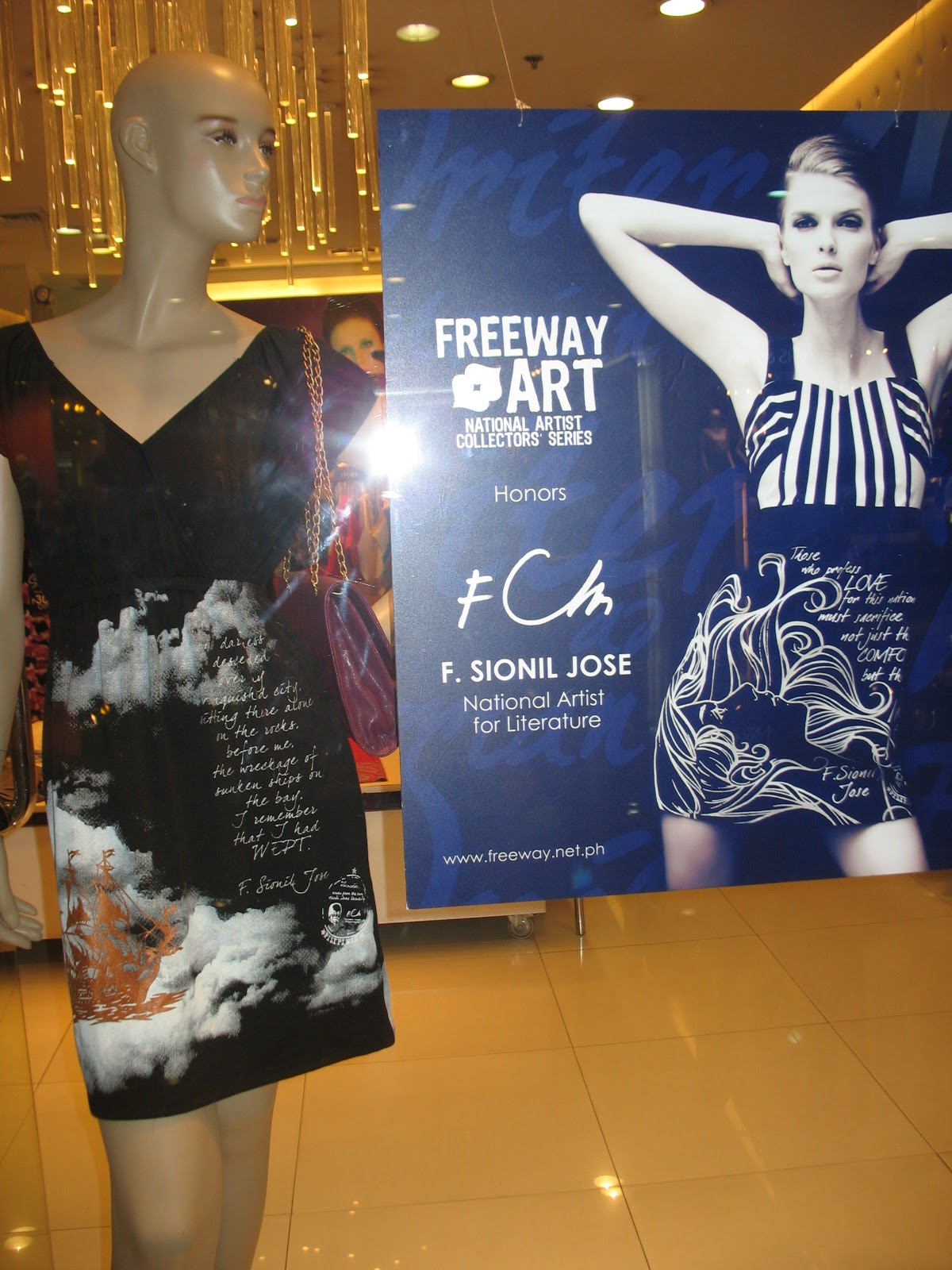 But that night, my usual window shopping became a lot more interesting when I saw this poster dubbed “Freeway Honors National Artist F. Sionil Jose.” It’s pretty refreshing for a clothing company to have come up with this one-of-a-kind idea of combining literature and fashion. Whoever thought of this certainly had inside him or her a fervor for the arts, history and our country in general. 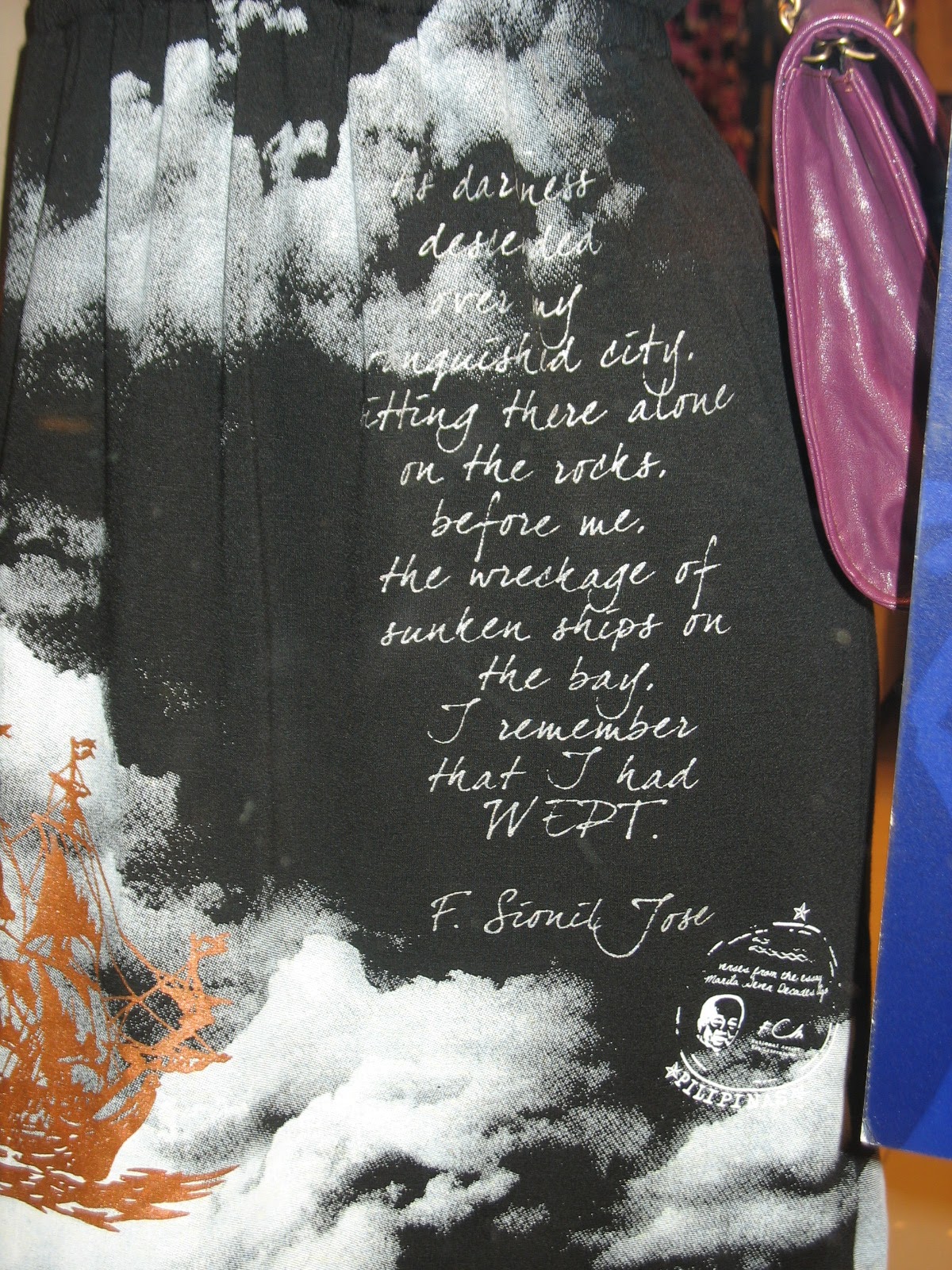 On the lower portion of this black mini, a portion of F. Sionil’ Jose’s (December 3, 1924) writings is seen:

…Darkness descended over my vanquished city.
Sitting there alone on the rocks,
before me,
the wreckage of sunken ships on
the bay.
I remember that I had
WEPT. 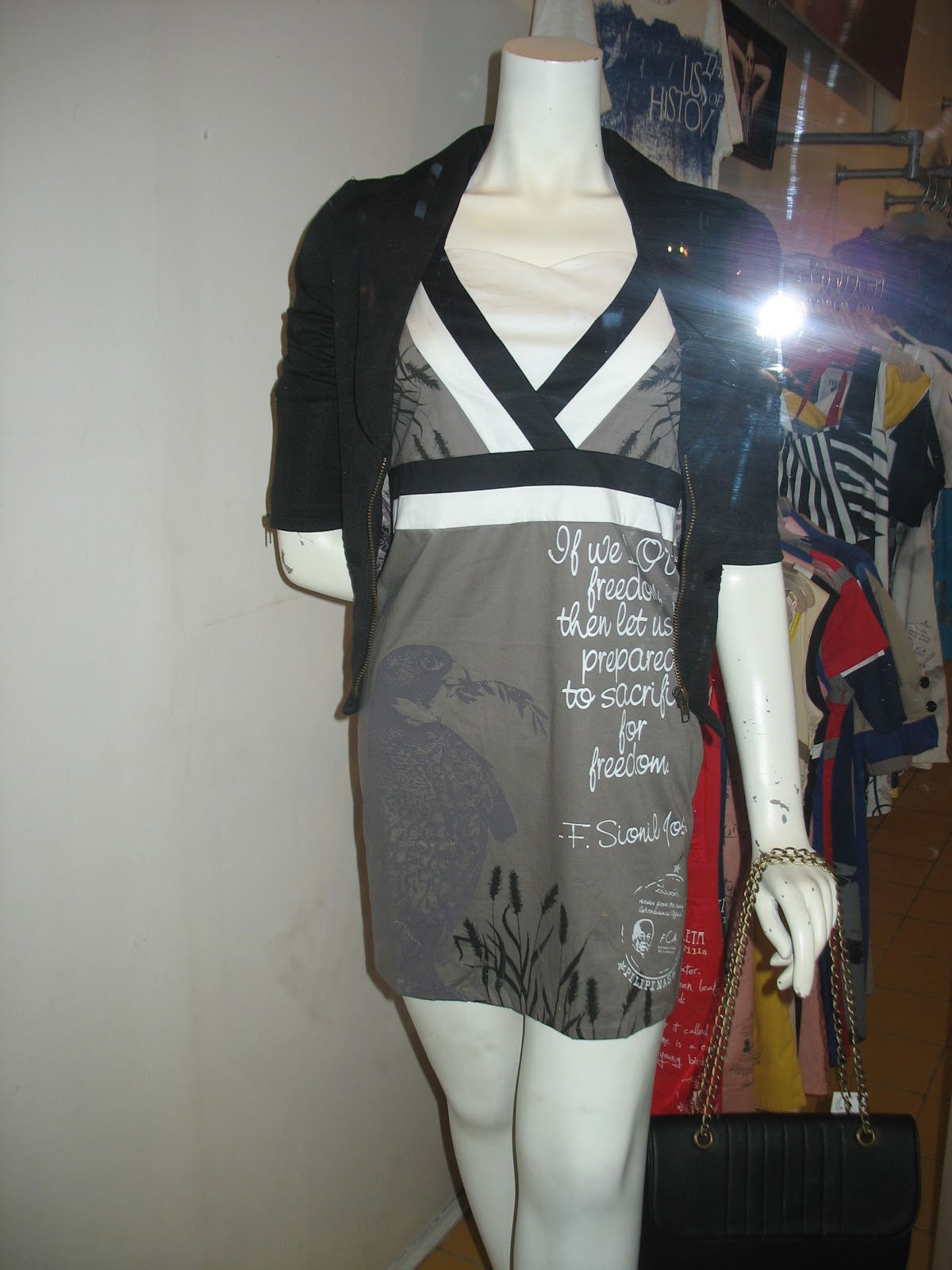 Same thing is done in this gray mini… 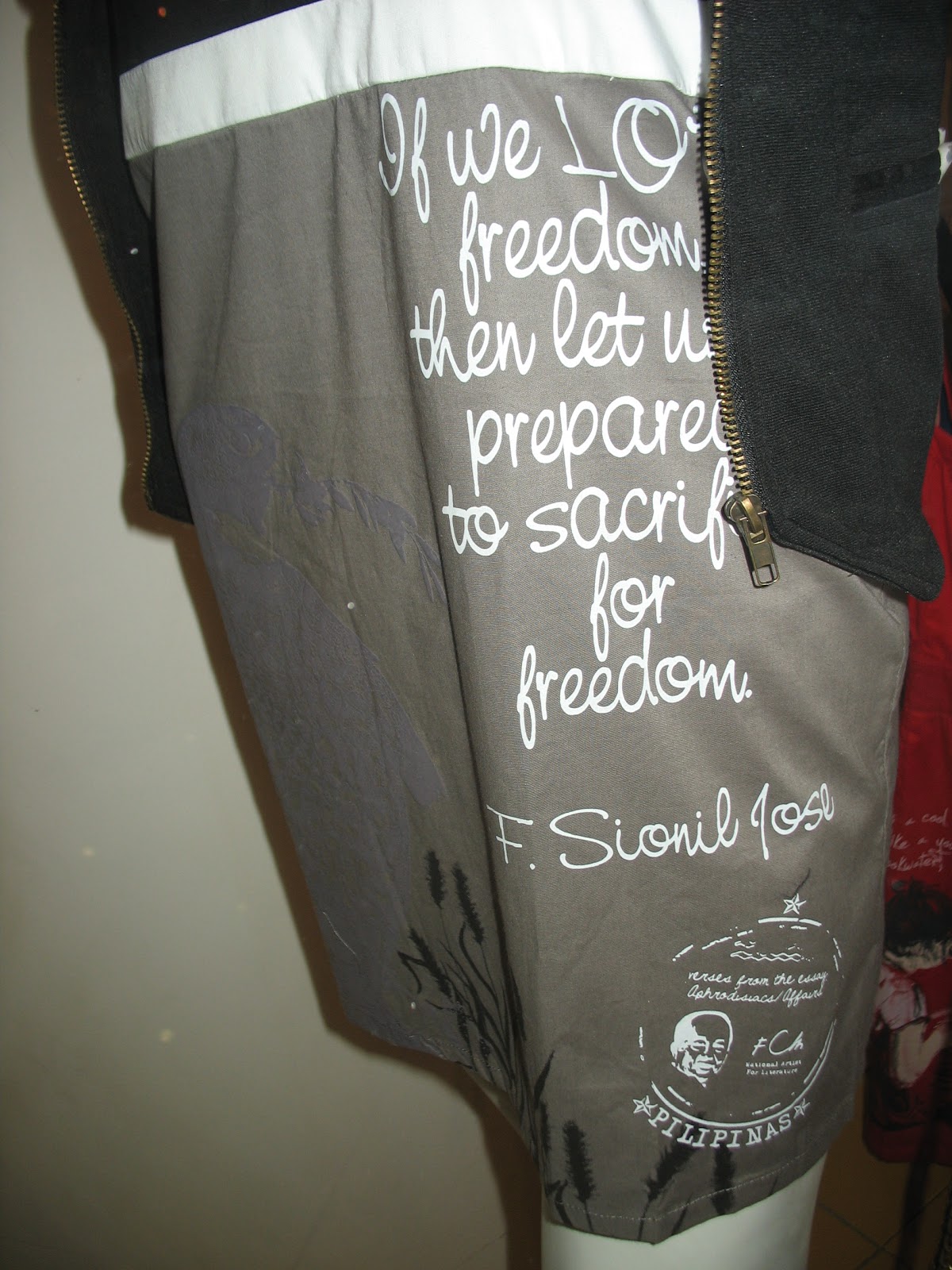 A closer look revealed this brilliant statement by the national artist:

“If we love
freedom
then let us
prepare
to sacrifice
for
freedom.” 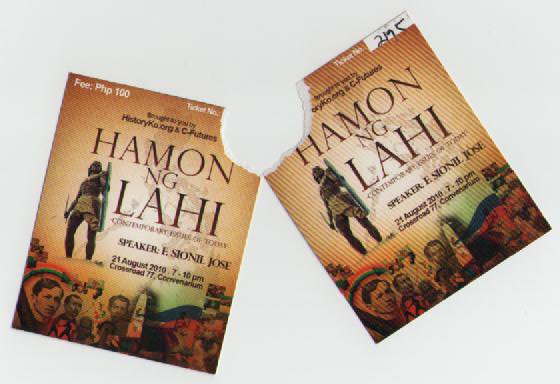 I have been very much interested in Mr. Jose’s works for sometime now ever since I attended this seminar entitled Hamon ng Lahi made possible by Creative Futures and HistoryKo.org… 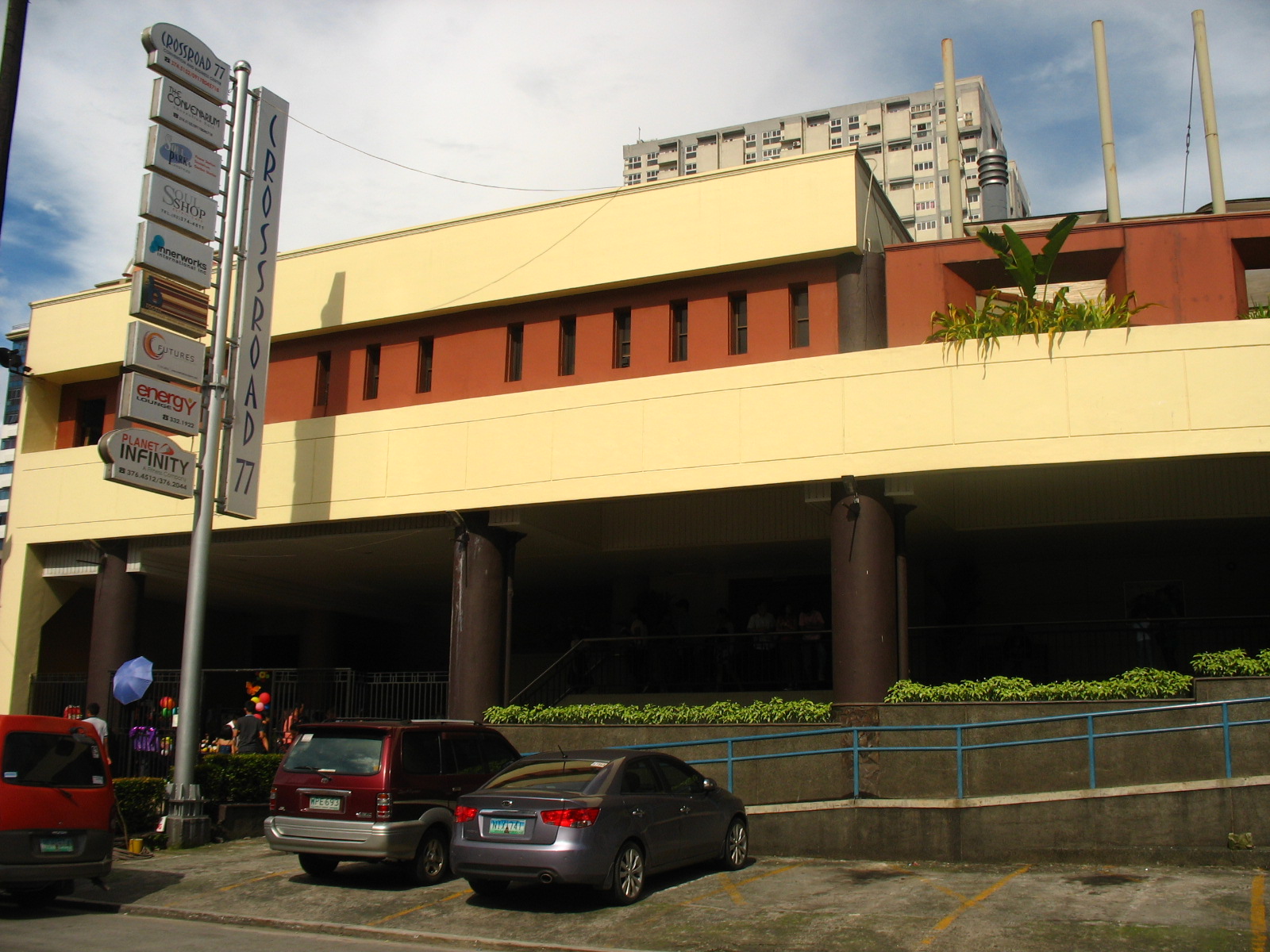 …last August 21, 2010 held at Crossroad 77 in Mother Ignacia, Q.C. It was a three-hour discussion with a group of curious learners from HistoryKo.org asking Mr. Jose about what he thought on a variety of subjects ranging from family to Pacquiao to our colonized minds. What I loved about him was his candor, honesty and unusual wit brought about by a deep introspection about life and nationalistic spirit for the past 87 years. 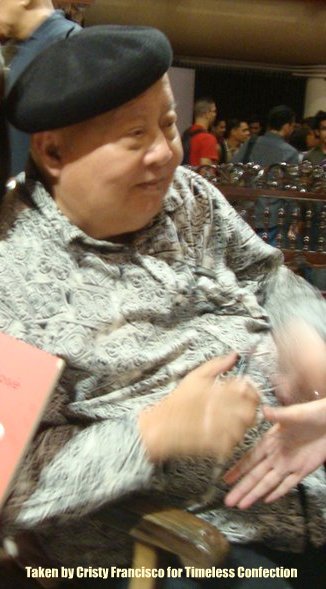 Here’s a summary of some of the things that he said which certainly made an impact on me:

HOW DID PACQUIAO SUCCEED?
Although he has displayed a lack of understanding on some things, he succeeded as a boxer because of these three elements:
a.  Hard work and discipline.
b.  He competes in the field that he’s good at and gives it his all.

ON HIS WRITING TECHNIQUE:
*  If you think my book is easy to read, it’s because the writing part has been difficult.

ON JAPANESE CRAFTSMANSHIP:
Japan is Japan because japanese industry and craftsmanship have been honed since childhood.

ON PRE-HISTORIC PHILIPPINES:
*  We don’t have anything that will glorifiy our past.
*  The Code of Kalantiaw is not true!

ON PHILIPPINE NATIONALISM:
*  “Liberty is in the heart, when it dies there, no constitution can ever revive it.”
*  “Our sense of history is close to our sense of nation.”

ON FILIPINO COLONIALISM AND MIGRATION:
*  It takes a foreigner to appreciate us because of our colonized minds.
*  The migration of Filipino musicians to Singapore has helped fill its symphony orchestra by around 50%. 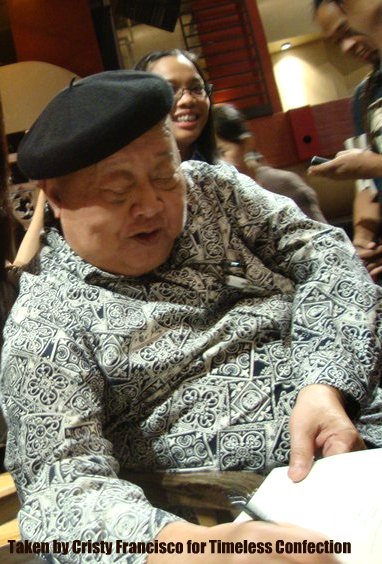 ON WHY HE STAYED FOCUS AND INDEPENDENT FROM POLITICS FOR THIS LONG:
*  He found a way to be financially independent through his bookstore business that was why he wasn’t afraid to tell politicians about his thoughts and suggestions. “He who has independent means has independent rules,” he said.

Proof is this must-read article: An Open Letter to Noynoy by F. Sionil Jose. If you are a truth-seeker and remains unbiased, you’ll understand that Mr. Jose’s best gift is telling the truth as it is. Mark these statements:

*   “From your comfortable and privileged cocoon, you know so little of our country and people. Seek the help of the best — and the best do not normally want to work in government and neither will they approach you. You have to seek them.”
*  “Your father wanted to destroy the most formidable obstacle to our progress — the Oligarchy to which you and your family belong. To succeed, you have to betray your class. If you cannot smash the oligarchy, at least strive to have their wealth develop this country, that they bring back the billions they stashed abroad. You cannot do this in six years, but you can begin.”
*  “She became president only because her husband was murdered and you became president elect only because your mother died. Still, you are your father’s son and may you now — for the good of this country and people — scale the heights he and your mother never reached.”
ADVICE TO STUDENTS:
*  Read books!
ADVICE TO FILIPINOS:
*  Study where power comes from. Ask yourself these questions:
a.  How is it used?
b.  Is it used for the benefit of justice? Remember: Justice is the greatest virtue in society.
ADVICE TO PARENTS:

*  Give the best education you can ever give to your kids.
*  Talk to your children about life on the dinner table.
*  Tell them not to waste any type of food served on their plates.
*  Tell them that the food they just ate came from honest labor: “Walang nakaw, galing sa pawis!” 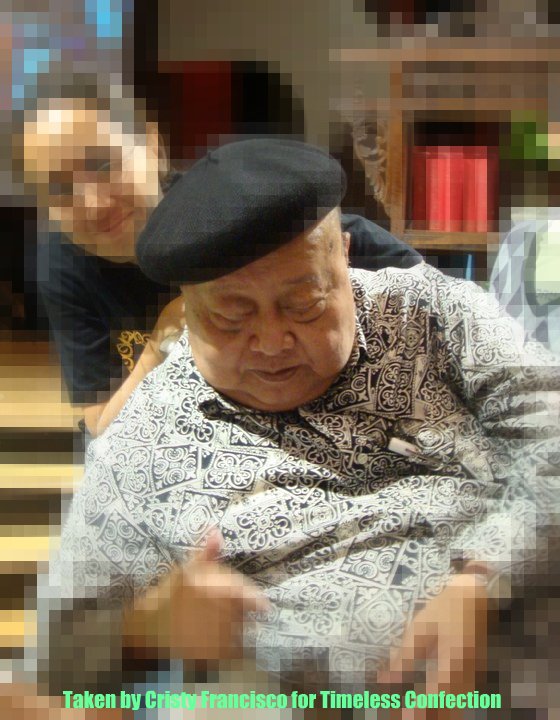 Many regard Mr. Jose as a sage of our times to whom we should continually learn from while he is still with us. It’s really a good thing that Creative Futures and HistoryKo.org had the foresight of  holding that wonderful table talk which later on created nationalistic waves in mainstream media. After all, we really can’t get enough of F. Sionil Jose’s fascinating take on life that’s why we need more venues to promote his writings to our kababayan who still don’t know much about him despite his decade-long popularity abroad.

this made me research the code of kalantiaw hahaha

Hi Kaye! Thanks for the sweet comment!! 😀 I really liked the Hello Kitty Cafe in Taiwan, but unfortunately they dont have one in KL or SG! They do have one in Korea though 😀

I see that you are a fan of K-dramas too! hehe.. btw, thanks for dropping by.. I dont know much about the history of Phillipines but I am going to Google it in a bit.. I am your newest follower and I look forward to reading your next post!

Thanks so much Xen for your super nice post!Yes, I love Korean dramas!Thanks so much for showing interest in our history, Xen. More power!

wow! he seems very wise. i'll read more about him when i get a chance. thanks for posting this momsie kaye!

you raised an interesting point there cafe mobility!

following you already! thanks for the sweet compliments! love your blog as well, very informative! btw, thanks for joining my first giveaway! will let you know the shipping details as soon as i can… my baby has been frequently running from a low-grade fever so, i'm a bit occupied. more power! keep blogging!

Thanks so much Xen for your super nice post!Yes, I love Korean dramas!Thanks so much for showing interest in our history, Xen. More power!