Click this
You are here: Home / Blog Collaborations / Confessions of a Melt-A-Holic!

It’s not easy being a fan. I’ve discovered recently that supporting one’s favorite star in every sense of the word can be a full time job. It involves time, effort, money and occasional squabbles. How do I know all these? Well, Rain happened.

Rain. Korean superstar. One of Time Magazine’s most influential people in the world. I was fairly content just watching his concerts, drama series and movies on DVD. All changed when I found out that he was coming to Manila for a one night only concert. I became hysterical, to say the least. I had to see him! I needed to see him!

Photo courtesy of CloudPh
Thank God I have a friend who shares the same passion in hunting down Rain as I have. Our Facebook exchange said it all. 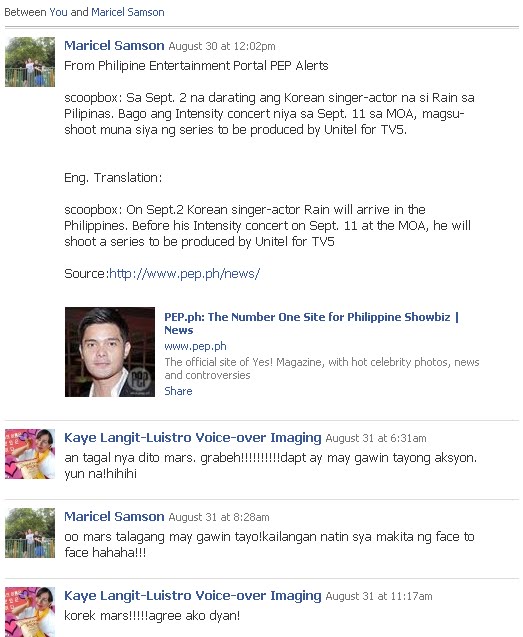 September 11, 2010. Nine Hours Before the Concert.
According to Cel’s information armor, Rain and the other Korean stars were staying at the Manila Hotel. A throng of fans was already there trying to get a glimpse of their idol[s]. Trying to control our own excitement, we tried our best to look calm and collected. Walking through the lobby, the chandeliers were a welcome sight. They looked like a prelude of wonderful sightings to come!

We walked around the hotel trying not to act as frantic fans which was really quite hard to do considering the situation. Rain was just a glance away-if we could find him. We moved to the pool area just in case he and the other Korean stars were there. All we saw were some Korean lady guests swimming away. Still no sight of him!

We heard our tummies growl in this supposed rendezvous with Rain. We couldn’t deny that we were famished. And so we decided to have a snack at this bar/resto.

We found out that Rain’s entourage frequently dined in this place– sans Rain of course. I could just imagine the pandemonium if he did decide to show up for a meal or so.

Just being there somehow brought us a step closer to him. And that made all the difference to us!

But busy bees, like us, had to eat too! We settled for biggie ensaymadas and some OJ. After all, the prices here were way steep! Whew!

Still no sign of Rain! We plopped into the lounge sofa to rest a bit and to listen to some fine music. Wow! This must be how the rich and famous spend their day off, we thought. Indeed, la dolce vita in every sense of the word. Wait? Are these girls here for Rain too? Did they get to see him?

We decided to get snapshots of everything. The experience was simply divine! We started talking to some people and found out that Rain left the hotel at 6:45 sharp to shoot the remainder of his Korean drama Fugitive. Although we wanted to stay longer, we couldn’t. We needed to run some errands before the concert.

Change of plans. Okay. One last bathroom trip and snapshot before we decided to go to the concert venue at SM Mall of Asia.

Mall of Asia. Six Hours Before the Concert.

We found some ecstatic fans at the VIP section as early as 2:30 PM. The reason for their enthusiasm? Rain was rehearsing inside! OMG! We found him at last!

But there were five more obstacles to our dream-the bouncers and security guard. Are they highly-trained for combat? Hmmm…

Okay. Since we couldn’t risk getting imprisoned just hours before the concert, we simply settled for this snapshot: Rain’s concert stage.

After all, we needed to get to our second errand: Claim our pre-ordered glow in the dark Rain ballers! Check!

The queue to the concert venue was filling up. But we needed energy for the concert and so we decided to have an early dinner.

Two Hours Before the Concert.
Finally! We entered the concert premises after hours of waiting!

There we befriended Rhodora, a huge fan of Rain.

Tension was building up in anticipation for the concert.

It’s Time for the Intensity Concert in Manila!

Alas! After Christian Bautista and U-Kiss’s performances, we were all lifted up to a state of blissful anticipation, if there was even a word. Everyone was shouting only one name. Rain! Rain! Rain! Okay to be accurate, three: Bi (Korean for Rain) and Jung Ji Hoon (Rain’s real name).

When he finally entered, pandemonium erupted! The fans shouted at the top of their voices, stomped their feet on the ground, jumped up and down with the energy of high school track stars and cheerleaders combined!

At that particular time, I had an Aha! moment. I finally understood why “major major” fans cried, pulled their hair or even fainted during a Beatles or Michael Jackson concert. Because that was what happened to me. Minutes before Rain appeared onstage, I was screaming my heart out, jumping up and down too. When I saw him enter for his first number, I felt that my chest felt constricted, and I couldn’t breathe. Was I going to have a heart attack? I thought that I was really going to faint! Amid the screaming and all the insanity around, I tried my absolute hardest to focus my camera on the large screen for a better shot.
For some reason, I accidentally pushed the stop button. Thank goodness, I was able to catch these explosive moves just in time.

Rain was truly a one-of-a-kind performer. He was a powerhouse on stage!

His moves were effortlessly crafted and his heart simply reached out to you during his performances.

Rain was everything you hoped he would be and so much more! Cel and I were still in cloud nine minutes after the concert. We were mesmerized by it all!

We got the chance to talk to some of Rain’s Japanese fans afterwards. Just imagine, they flew here just for the concert!

Though exhausted, Rain was worth all the time and effort!

Cel and her kind-hearted hubby Jondi brought me home that evening. Bless them! Although exhausted, I couldn’t really sleep. So I decided to upload all the pictures and videos for my blog. In just three hours, I finished the uploads and was surprised to know that my contributions were among the first to come out on the web!
Audioized Version.
Play and Listen!
What better way to unwind after a very busy day than by enjoying a pint of the new Caramel Biscuit & Cream flavor of Häagen-Dazs ice cream?

I’ve come across rave reviews of this particular flavor and thought that I should eat it after Rain’s concert as a celebration of sorts.

Still pretty much hyped up after his concert, I kissed my newfound best friend.

Can’t wait to get a taste of the new flavor! Well, if it’s Häagen-Dazs, it must be good.

The caramelly, roasty- sweet aroma is a luscious invite to the senses!

Finally, you’re just a spoonful away…

Wait! Did I just speak in French? I haven’t spoken the language in years. And I don’t even know much to begin with. Ice cream this good takes you to a state of bliss you never even know possible.

Do not disturb. Slow melting in progress.
I just can’t get enough of this!

What more can I ask for in an ice cream?

Roasty-sweet aroma. Velvety smooth cream. Incredibly nutty and crunchy with flavorful bursts of caramel. The New Caramel Biscuit & Cream of Häagen-Dazs melts all my worries away to a state of blissful contentment. It’s Christmas in a cup all year round!

Do not disturb. Slow melting in progress.

You Have Until Today To Claim Your Free Macaron de Paris From Tous Les Jo...
Had A Blast At The McDonald's Kiddie Crew Workshop!
Book a Cook-O-Rama Session at the Asian Food Channel (AFC) Studio in Sing...
Get A Chance To Win 8 Giant Red Velvet Cuppies From Cupcakes By Sonja!
Two Days at Conti's Trinoma

Haagen Dazs Caramel Biscuit and Cream…? OMG. That sounds even MORE amazing than Dulce con Leche. I can only imagine such decadence. Oh my heavens.

I must have that.

Thanks for another terrific post on your Intensity experience in Manila, Kaye! 😀

Between that and the ice cream I'm nearly in a coma. *giggle*

And good luck with the Melting Me Slowly contest, too. That's some entry…!

Hello dear Stephe!
Your post warmed my heart as always.
Yes. the new flavor is decadence personified.
But wait. I haven't tried Dulce con leche yet.
I'll try that later at the mall.
You're right Stephe.
Between Rain and the ice cream, I honestly
thought that I would go into cardiac arrest or something. hihihi.
I'm glad you enjoyed the post.
Thanks!!!!!

Good luck 🙂 My mom is also a Rain fan! She was so impressed with your post 😛

Thank you so much Kate! You're so sweet!Please extend my thanks to your mom. Love her already.Mwah!

Good luck 🙂 My mom is also a Rain fan! She was so impressed with your post 😛