Click this
You are here: Home / Asian Destinations / The Cultures of Kyoto and Kanagawa-ken

When photos of my Japan trip survived “Ondoy“, I’ve become utterly convinced that they were spared for a reason. That was my very first trip abroad and certainly, one of the most memorable moments in my life.

I thought that as a TV newscaster…

and a radio announcer…

I could qualify for the Youth Exchange Program held annually by the Department of Foreign Affairs and the Government of Japan.

Barely one month before the deadline, I scrambled, rushed and dashed to relevant organizations and agencies just to make sure that I got all the requirements right. 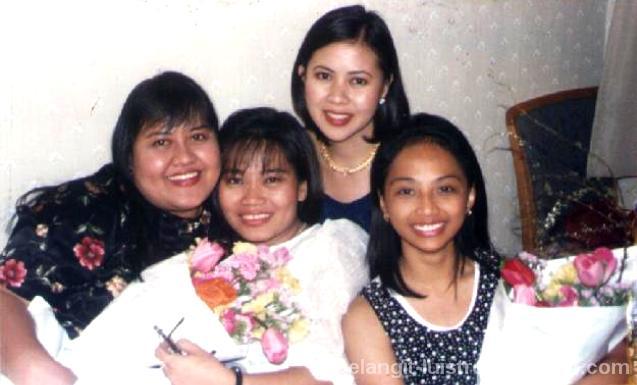 Only by God’s grace, was I chosen, together with a handful of professionals to represent the country in the RP-Japan Friendship Programme for the 21st Century sponsored by the Government of Japan through the Japan Information Cooperation Agency (JICA). 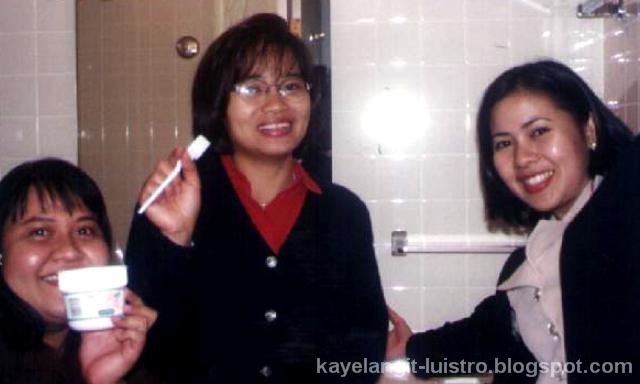 From January 13 to February 9, 1999, all of us delegates visited Tokyo, Osaka, Kyoto, Kanagawa-ken, Matsuyama–shi Ehime Prefecture, Hiroshima, Japan–without spending a single cent, or should I say, yen.


JICA certainly knew how to pamper us! With about 85,000 yen as pocket money, and everything else paid for, our only job was to enjoy and learn from every activity prepared just for us. For one, our group experienced Japanese culture extraordinaire in Chigasaki, Kanagawa Prefecture.

The boys learned Ikebana, the art of flower arrangement…

…while us girls, were taught the sublime Arts of Tea Ceremony and the Kimono. 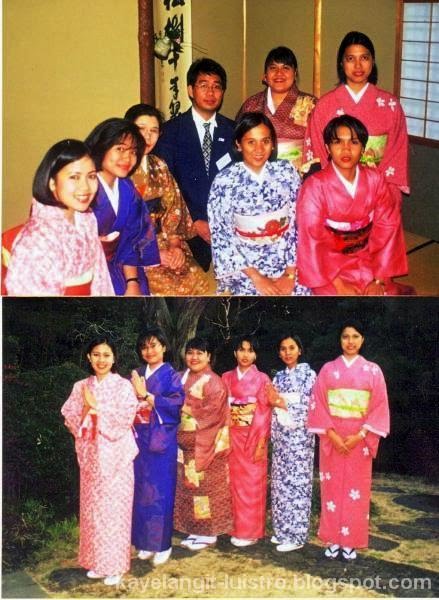 Ikebana, Tea Ceremonoy and Kimono Wearing
Courtesy of the International Association of Chigasaki

For two hours, the kimono expert from the International Association of Chigasaki helped us put on an array of exquisite kimono made out of shibori, with matching undergarments, obi, ties, socks, and sandals to boot.

Kimono Wearing
Courtesy of the International Association of Chigasaki

Here, my close friend Pam Pamplona–Riggan and I couldn’t resist the chance to freeze this moment the only way we knew how. 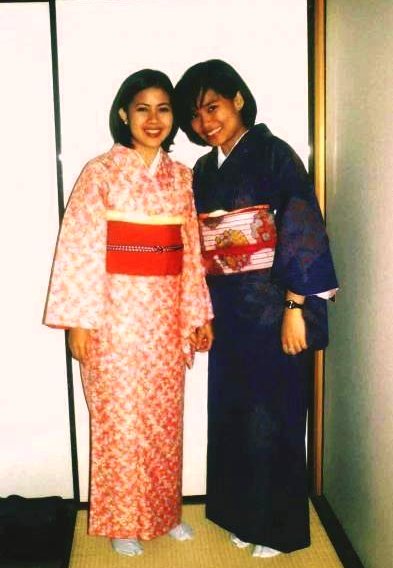 Kimono Wearing
Courtesy of the International Association of Chigasaki

My friend Pamu couldn’t resist having another take… Say sushi! 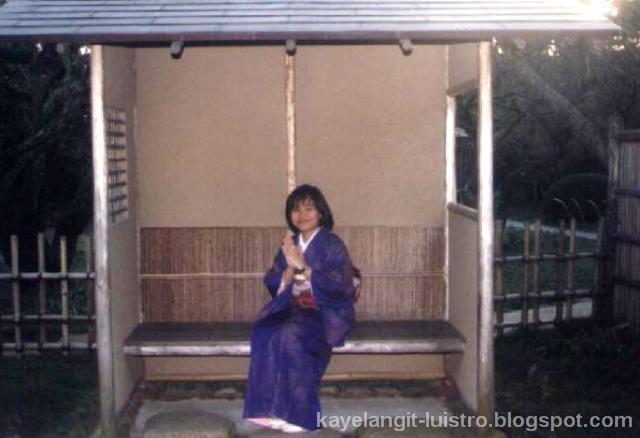 Kimono Wearing
Courtesy of the International Association of Chigasaki
Kyoto
This photo reminded me of another snapshot taken in Kyoto, just a few weeks after we arrived in Japan. We immediately saw three geisha-like passers-by in front of the Kiyomizu Temple which prompted most tourists to get photo-ops.

We were among those who got the chance to have our pictures taken with these ladies dressed in geisha costumes. It was a good thing that despite our broken Nihonggo, we were able to persuade them to have our photo op. Kirei, desu ne? 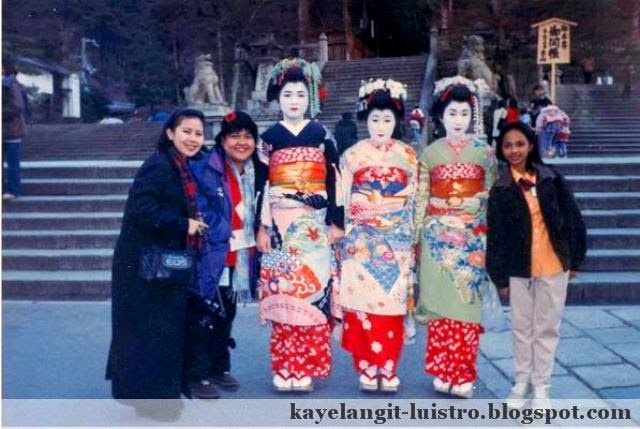 After the photo-op we went inside Kiyomizu Temple, otherwise known as Kiyomizudera in Japanese. It dates back from the eighth century and is usually flocked by tourists all year round.

Kiyomizu Temple (Kiyomizudera)
Beneath the temple’s main hall, lies an Otowa waterfall, where visitors can drink from. Buddhists believe that drinking from it provides wisdom, health, and longevity to the pure of heart. But for the greedy, misfortune befalls them.


Kiyomizu Temple
How to Reach It:
Kiyomizudera can be reached from Kyoto Station by bus number
100 or 206 (15 minutes, 220 yen). Get off at Gojo-zaka or Kiyomizu-michi bus
stop, from where it is a ten minute uphill walk to the temple. Alternatively,
Kiyomizudera is about a 20 minute walk from Kiyomizu-Gojo Station along the
Keihan Railway Line.
Hours and Fees:
Hours:  6:00 to 18:00
Closed: No closing days
Admission: 300 yen
Spring and Fall Illumination:
Hours:  18:30 to 21:30
(mid March to mid April and mid November to early December)
Admission: 400 yen